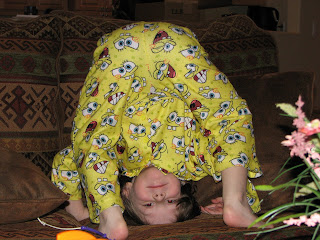 Today is National Wear Your Pajamas To Work Day! Sounds good to me! Then again, we homeschool and I'm home all day, so it doesn't really matter what I wear. The boys, however, will be thrilled to hear of this holiday. If I let them, they'd wear their jammies all the time. This is Neil in the photograph. I took that in 2006 when we first moved here. He's such a goof. If you click on the link above, you'll find there's an entire website dedicated to wearing your pajamas to work. I even saw a police officer in PJs in one of the pictures.
It's believed that pajamas originated in India in 1880. They were designed for men to sleep in rather than nightshirts. The word pajamas translates into leg garment. They were worn by both sexes and were soon popular throughout Europe. It wasn't until 1920 that they took off in the US.
Pajamas have played a huge role in film and literature. Who can forget Ralphie in his pink bunny jammies in A Christmas Story? Or how Wendy, John, and Michael wore their pajamas during the entire Peter Pan story? One that always makes me laugh is Chevy Chase in Christmas Vacation. When Clark gets stuck in the attic, he walks on the ceiling beams. He has PJs on, but if you look closely, he has dark underwear on underneath. There are many children's books about PJs. There are Bananas in Pajamas, the Cat's Pajamas, The Boy in the Striped Pajamas -- the list goes on and on.
My favorite pajamas are an old pair of traditional men's PJs. They're about 5 sizes too big for me, but that's what I love about them. The top is big enough to wear by itself and I'd live in the pants if I could. I am, however, not the type of person who will go out shopping in my pajamas. I see that all the time here and I saw it while I lived in California too. I'm all for being comfortable, but I've never been one to leave the house in jammies.
How about you -- got a favorite pair of pajamas?
Posted by Rena Jones at 7:06 AM