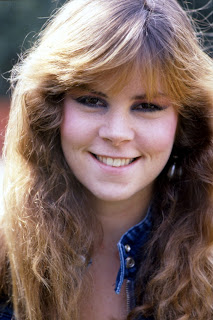 A friend of mine took this picture of me in 1984. You might even know him -- Rick Scarry, as he's been in hundreds of TV shows and movies. I met Rick when he was working as a disk jockey for a radio station called KMET out of Los Angeles. Rick still works as an actor, but he no longer DJs and doesn't have as much time for photography like he used to. We lost touch over the years, but recently we connected again through Facebook. He's a sweet man. I think he's in Italy at the moment -- the life of an actor -- sigh.
I was 19 when this picture was taken, so it was 24 years ago. Damn, that sounds ancient just writing it out. That's my natural hair color, by the way. A lot of people think I have black hair, but it's actually dark brown. I've been debating going back to my reddish-brown color. So I ask you all, what hair color do you think I should be -- reddish-brown or dark brown?
Posted by Rena Jones at 5:28 PM