Getting Kids To Write ... 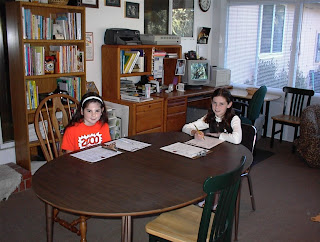 About a week ago, Jo blogged on Books go Beyond Reading a post called Ways To Get Children Interested In Writing. She discussed ways to spark imagination in young children by using writing prompts or "what if ..." situations. She has some good ideas, so check out her blog if you can.
I'm pretty lucky when it comes to my kids. I don't know if it's because we homeschool and it's a part of our everyday life, or if they've picked up the love of reading and writing from me. I hope it's a little of both. My girls are avid readers and they're really into classics. You would think at ages 19 and 18 that they'd be into all the young adult books, but that's just not their thing. Check out Nichelle's blog, In My Own World to see what I mean. Nicole is the same way and can be found reading writings from Mark Twain, Edgar Allen Poe, Charles Dickens, and such. She's considering a writing major for college also, which I think will be perfect for her.

My boys are the same way. Nathan is 9 and Neil is 7, and they both love to read and write. Nathan comes up with the most amazing story ideas. I keep telling him to write them down, but he's just bursting with ideas. He has a few that sound really good. He'll be explaining them to me and I can totally picture them in a book or movie. His new thing is making movie posters of his story ideas. He draws the cover, or characters, and then designs them to look just like the posters you'd see at the theater. He even includes the actors and rating system. They're really detailed. Neil isn't into the writing part so much, but he tries. He'd rather draw things out and explain them to me. I'm sure he'll pick up the other part eventually. The boys also come up with book ideas for me -- they're a constant source of ideas. Sometimes they're silly, but other times they're really good. I've included a lot of them in my stories -- including A New Job for Dilly, which will be out soon!
This picture of the girls was from 2001, and it was taken with a really old digital camera, so the quality isn't the best. One thing I've always done to encourage my kids to write is fill out a form called All About Me on the first day of school. It's 2 pages long and they have to write down all sorts of things -- from their address, to how tall they are, to what pets they have, to their favorite kind of cereal, their favorite books at the time, to what they want to do in school that year, and so forth. It's pretty detailed and usually takes them awhile to fill out. There is even a place to glue their picture on it. I've found it's a great way for them to keep track of their likes and dislikes and it's fun for them to go back and look at it years later. Did you write as a kid? If you have kids now, how do you encourage them to write?
Posted by Rena Jones at 6:50 AM