Lions and tigers and ... 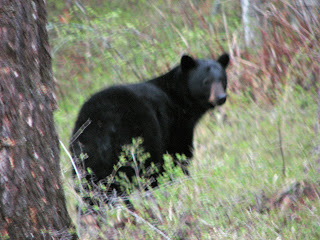 As you know, I've been sick and haven't gotten much sleep these past few nights. Last night I was finally coughing a little less and was just starting to get drowsy, only for the neighbor's dogs to start barking. I know their barks and this was their bear bark. Just as I was starting to fall asleep, I ended up getting up to check the yard a few times. I knew the bear was out there, but it was too dark to see anything. I'd lie back down and the dogs would start up again -- over and over. I didn't get much sleep, to say the least.
A few minutes ago Rick was getting ready to leave for work and he comes in and says, "The bear is in the yard." We peek out our bedroom window and see her. It was still kind of dark and we didn't have time to fuss with camera settings, so we didn't get any good pictures of her. This was the best we could get, but at least you can see her. The good thing is that as soon as she saw us moving in the house, she took off up the hill. That's better than last year when the bears would just sit down and look at us like they were saying, "What?" This looked like the same bear as last year, but I can't be sure. She didn't have any cubs and she was limping a little. But as soon as she saw us, she skedaddled out of here, which is good. People freak out when I tell them we get bears in our yard, but I think it's cool. When we first moved here, our neighbors said to us, "You will see bears, and sometimes even grizzlies and mountain lions." So far, we've only seen black bears. Here are some facts about bears --

It's weird seeing them in our yard like this. We love national parks and would spend hours driving around hoping to spot a bear. Now it's just a matter of when they'll show up. I'm glad Rick got to see this one because he usually misses them. She looked like a big teddy bear as she bounced up the hill. I can tell you, it's totally different seeing them in the daytime than it is at night. In the day, I wish they'd stick around long enough for me to get really good pictures, but at night we're like, "Okay, go home now!"