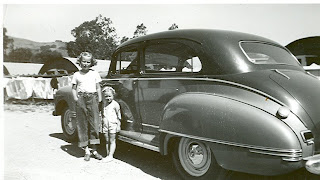 To all the moms out there, I hope you're having a great Mother's Day. I had another rough night and ended up sleeping on the couch so I could prop myself up better. When I lie down, I cough too much. I woke up last night in a coughing fit that was so bad that I was choking. Not fun. Rick got me up from the couch this morning and made me go back to bed. Awhile later he brought me breakfast in bed, followed by some presents with the kids. They gave me an Olympus Stylus 1050 camera, which is something I've been wanting. It can go underwater down to 10 feet, so it will be perfect to take on our kayak trips. It's also shockproof and can be used when the temperatures are below zero. Very cool! They also gave me a huckleberry coffee mug, filled with huckleberry cocoa and a huckleberry chocolate bar -- yum!
The picture above is of my mom, Marilyn. She's the bigger one and I'm not sure who the other child was. My mom was an only child, so it must have been a neighbor or friend. My mom was born in Oklahoma, and to my understanding, she was born to a single mother who put her up for adoption right after birth. Because of that, we don't know anything about her family history. I believe she married my dad when she was still in nursing school. I was born in 1965 and was the last of 3 children. Less than 2 years after I was born, my father died and my mom had to raise her children alone. She moved from our home in Santa Barbara to Ojai so she could be closer to her parents.
It had to be hard to deal with all of that at such a young age, in addition to having 3 small children and a career. My mom spent her entire nursing career working in geriatrics. Several years back, she had a series of strokes and a massive heart attack, which has left her nearly paralyzed, unable to speak, and unable to eat. She currently lives in Barstow, California in a nursing home, with my brother nearby. I'm a lot like my mom -- I have her sarcastic sense of humor, for one. Other things my mom and I have in common is the love of photography, crock-pot cooking, music, Elvis, going to Las Vegas, and camping. It's hard being so far away from her, especially in the condition she's currently in. Anyway, I hope everyone has a wonderful Mother's Day, whether you're a mother or not.
Posted by Rena Jones at 11:34 AM