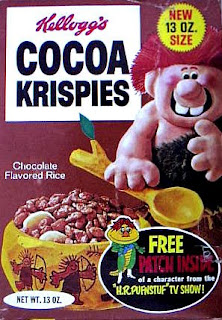 Do you like cold cereal? I grew up in the 70s and remember cereal being a big deal. In the past, I've blogged about old records that used to be on the backs of cereal boxes. I remember standing in the aisles, scanning all the boxes of cereal, trying to find just the right one. Of course, that mostly had to do with what free toy was being offered inside. My boys would love to pick out cereal that way, but fortunately, they're both picky eaters. I'm not only a cereal nut, but I also love nostalgia. I found this Cereal Box Archive website and was going through some of the old pictures. Boy, talk about a blast from the past with some of these old cereals! It's fun to go back and look at these old boxes and see how much they've changed over the years.
With 4 kids, we go through a lot of cereal at our house. Rick & Neil eat it dry, but everyone else likes milk. Nathan is totally cuckoo for Cocoa Puffs and would eat that all the time. I think he just found a new love with Cinnamon Toast Crunch. Neil & Rick can put away a box of Cap'n Crunch Berries in record speed. The girls loved sugary cereals when they were little, but now they prefer simple ones like Rice Krispies, Corn Flakes, Crispix, and so forth. So, here is a question for you -- what are your top 5 favorite cereals? They don't have to be dry cereals either. Mine would have to be --
And yes, it really is 3am as I type this. I've had another sleepless night of nonstop coughing and I finally gave in and got up. I'd love to have a bowl of cereal, but the milk would just make me cough worse. Also, one last thing and then I'm going back to bed -- please check out Nichelle's blog, In My Own World. She posted about her upcoming training with YWAM. It's hard to believe in less than a month, she'll be leaving us and living in Maui for 3 months, followed by another 3 months in SE Asia. If you could stop by her blog and say hello, I know she'd love that. I'd appreciate it if everyone could keep her in their thoughts and prayers as she embarks on this adventure.
Posted by Rena Jones at 3:20 AM