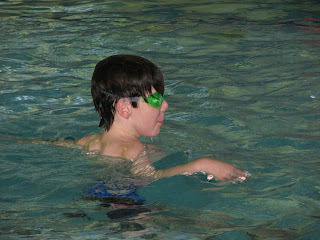 My poor boys -- this is the second week in a row they've missed swimming. Considering the session isn't that long to begin with, I don't know if it's worth them to even go back. They've had colds lately. Swimming and the sniffles don't mix well. Not only that, but now they're coughing and I don't want to take any chances with their immunities down. They don't have the flu and aren't running fevers, but with everyone being so cautious right now, it's better that they stay home.
Nathan & Neil have been doing really good with their swimming lessons. That is surprising in itself because their instructor really isn't that good. She's nice, but she's about 500 years old and doesn't make the class fun for the kids. She's more of a ... nag. One time she jokingly told Rick that Neil (above) needed to have a drink before class so he would relax a little. Ummm ... okay. Rick has a membership at the gym and I'm hoping he can work with the boys during free swim time. We take them swimming in the lakes here during the summer, so at least they've gotten a good start.
On the other hand, Nathan (below) has finally mastered bike riding. He learned later than most kids, I guess, but that's because he's been so addicted to his Big Wheels. Plus, with all the ice and snow, he didn't get as much practice. He's gotten the hang of it now, so he's feeling really proud of himself for that. It's going to be a beautiful day today, so hopefully we can spend it outside. I think we're going to go to the storage place and pick up our travel trailer and bring it back home. Our home owner association doesn't allow us to leave it here year round, but we can keep it here during seasonal times. None of our neighbors would complain, but we still keep it in storage during the winter. The boys will be happy to have Trailee, as they call it, back home. I spent a few hours outside yesterday collecting fallen sticks to burn in the woodstove downstairs. I think Rick's going to work on our fountain today. He's trying to drain the water out so he can reseal it so it doesn't leak as much. Yesterday he got a worm stuck in the pump he was using and it fried it -- both the pump and the worm! ***shudder*** Anyway, I hope everyone has a great weekend! 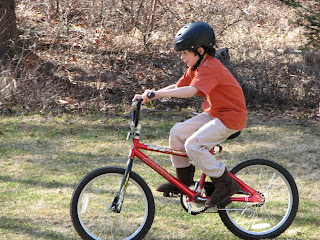