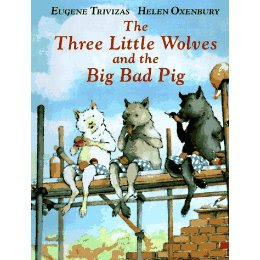 Do you like remakes or retellings of classic stories? How about remakes of movies? It seems every time we turn around, there's a remake of an old movie. Most of the time, I'm not too thrilled with the new versions and don't go see them. I do like some. I was surprised how much I liked the newer versions of Horton Hears A Who, The Cat in the Hat, and The Grinch. I guess with kid's stuff I'm more open to it. Some classics just should not be redone, like Gone With The Wind, Casablanca, or The Wizard of Oz.
The other day when Neil was sick, the boys and I spent most of the day on my bed watching Looney Tunes cartoons. One of the DVDs was all about fairy tales. I was surprised to see how many versions of Little Red Riding Hood, The Three Little Pigs, and The Three Bears there were. I don't think we even saw all the ones they made. I loved the ones where they combined the famous characters into one show, like Little Red calling Goldilocks on the phone. One of my books, The Marshmallow Man, is a retelling of the classic story, The Gingerbread Man. I can't wait to see it when it comes out. Stephen Macquignon is illustrating it and I've seen one of his sketches of the main character. I'm sure the book will be really cute.
The boys and I love reading books that are retellings of classic stories. One of our favorites is The Three Little Wolves and the Big Bad Pig. That's a really funny one. That is one mean pig! My friend Nancy told us about one called The Three Little Dinosaurs and that's really cute too. Usually, at the end of our school year, I do some fun stuff with the kids with stories like this. I'll pick one story and then find different versions to read throughout the week. The boys love picking out the similarities and differences from the original stories. I'll probably do that again next week.
What are some of your favorite retellings? Is there a book or movie you'd love to see redone in a new way? Is there a book or movie that you would NOT want remade? What about classic old stories that have made their way into people's hearts through huge companies like Disney -- do you think anyone could ever retell The Little Mermaid or The Lion King and make it something people would want to see or read again? Do you think there is a story that's been retold to death?
Posted by Rena Jones at 7:12 AM