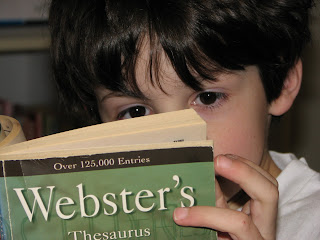 Words are funny. I think most of us make up our own pronunciation of words for different reasons. My family has a joke about the word tiger. Awhile back when we had our house on the market, our first realtors (ones we fired later) came in and photographed the house. The very next day, they had the same tiger picture on their website that I have on my bedroom wall. The thing was, they spelled it wrong. Therefore, we now call tigers -- tigars. We have other words, like grils for girls, because the boys always said it that way. Or Bacca for my father-in-law because my daughter couldn't say Grandpa when she was little. People on the outside would probably scratch their heads and wonder what the heck we are talking about. When I was little, I called Neapolitan ice cream -- Napoleon ice cream. Or the time when my daughter misspelled gobble and wrote it as gooble. Some words stick with you forever. Sometimes words are changed in how they're said, or they're misspelled, or they're even misspelled on purpose. We have a sporting goods store here called Snappy's Sport Senter. My boys have an entire language of their own, and even I don't understand it some days. You know those squishy, spiked balls you see everywhere? Those are called yingels -- and God forbid if you say it wrong because you will be corrected!
As writers, words are everything. For novels, a higher word count is important. For picture books, less words are better, but they have to be perfectly chosen. For poetry, words are all about rhyme and meter. I watched an episode of M*A*S*H last night and Charles was reading a letter from Radar's mother. He was making fun of how she pronounced things and Radar corrected him saying, "No, that's how she talks." As a writer, do you find it easy or hard to write in a voice you wouldn't normally talk in? If you're from the north, would it be difficult for you to write your character with a southern accent? It's hard for me not to write the way I speak.
When I was thinking about this, the song Words by Missing Persons came to mind. Remember that old 80s song? I went to You Tube to post it here, but every version of the song has had the embedding disabled. To listen to it, just click here and it will come up. It's more about listening to the words someone has to say, and not so much about my post. But ironically, it was the first thing that came to mind when I started writing this.
Posted by Rena Jones at 8:50 AM