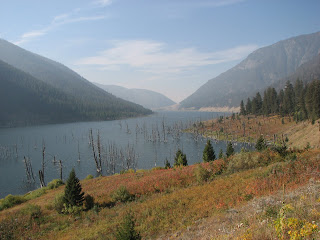 There was another earthquake this morning in the Philippines. It was a 6.6 quake, but I haven't heard anything reported on it yet. The area is still recovering from two typhoons with more on the way. Not sure when or if the new earthquake will even make the news. I've been keeping my computer open to the USGS site, mainly on the Australia Region, since that's where Nichelle is on the island of Borneo. There are earthquakes all the time, especially in this area, so it's not uncommon. It is, however, uncommon to have so many large ones. Even today's 6.6 is nothing to sneeze at. If you remember the 1989 Loma Prieta earthquake near San Francisco, that registered as a 6.9 quake. We felt that quake good, as we were on the Santa Barbara Pier at the time. Nichelle was a month old and we had driven our car out onto the pier that day. We'd done that dozens of times before, but something inside me said not to go that day, but we did anyway. Weird.
So anyway, I'm keeping myself stressed out by watching the USGS site, hoping I don't see anything happening in Borneo. As of now, it's happening all around them, so that's playing havoc with my nerves. I'm not new to this website though, as I've had it saved on my computer for years. I guess being born and raised in California where earthquakes are common has something to do with that. I've been in many quakes, though never in a direct epicenter. The quakes I've been in have been unnerving, but it's the aftershocks that really bother you because by that point, you're walking on eggshells waiting for them. Most initial earthquakes happen and everyone looks at each other and goes, "What was that?" Of course, it's an entirely different story when you're near an epicenter. I'm a news-junkie too, so I miss all the special reports Cal-Tech puts out when there are a lot of earthquakes going on around the world.
We had to take a detour on our way home from Yellowstone last Monday. We came across this really interesting lake. That's it pictured above with the trees sticking out of the water. It looked really eerie at first because trees don't usually grow out of lakes. Then we came across a lookout that had a sign so we decided to stop. The sign is pictured below. This is Earthquake Lake in southwestern Montana. It was formed after a 7.3 earthquake struck in 1959, knocking down 80 million tons of mountainside into the Madison River. The quake killed 28 people, who were camping along the river. If you look at my picture and then down at the map below, you can see where they built the visitor center on top of the landslide. We didn't stop there, but I'd like to the next time we go to Yellowstone. Check out the link for more information. Apparently, this is the largest earthquake that has ever struck Montana as well as one of the largest in US history.
What is really ironic is that we drove by this lake on Monday. I believe it was Tuesday morning when I woke up hearing the news about the earthquake in Indonesia. Since then, it's just been one after another. I feel so bad for the people of Sumatra. They're saying the death toll is at 1100 now with possibly as many as 3000 missing. And now they've changed their efforts from a rescue mission to a recovery one. I'm normally touched by these stories, but with my daughter in the area, it's touching me just a little more than I'd like. November can't come soon enough. 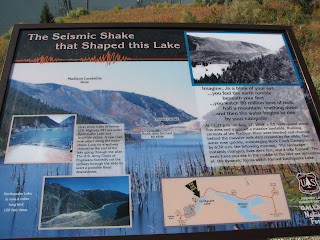