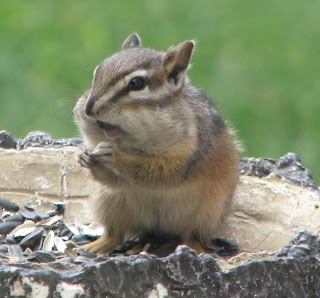 Do you think he could get anymore seeds in his mouth? I love watching chipmunks. We had lots of squirrels at our house in California, but no chipmunks. They're tiny little critters and totally cute. The news is saying we might get 1-3 inches of snow tonight and it might get down to 8 degrees. I'll believe that when I see it. However, if the animals are any clue, the news might be right. The animals in our yard have been going bonkers. Between me chasing turkeys off my deck and the squirrels carrying on, it's never a dull moment. We saw this little chipmunk stuffing his pouches yesterday and I took a few pictures. There are many species of chipmunks and Montana is home to three chipmunk species -- the yellow-pined, the least, and the red-tailed. This particular one is a least chipmunk, the smallest of all. Here are some fun facts about least chipmunks ...
They are only 3 to 4 inches in length.
Least chipmunks weigh between 1 to 2 ounces.
They have 3 dark stripes on their faces.
They have 5 dark stripes on their backs.
Least chipmunks hibernate in winter, but only lightly.
They store food in their dens for winter.
They often steal from other animal's food supplies.
Least chipmunks eat seeds, berries, and insects.
Their predators include hawks, weasels, and cats.
Another fun fact is that a least chipmunk can stuff each of his pouches to be the same size of his head. If you think about that, it would be like seeing a 3-headed chipmunk! This little guy is getting close to looking like that. He fills up both pouches, runs back to his den, and then comes back for more. Every now and then he stops to nibble, but most of the time he's working. The squirrels don't do that. They just sit and pig out. The combo sort of reminds me of the ant and the grasshopper story, where the ant works hard all summer and the grasshopper is lazy. I guess the squirrels know I'll keep the feeders out when the snow comes. The chipmunks are smarter and will enjoy their seeds from their warm, cozy den. I can't say I blame them! 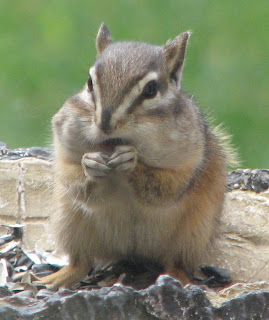