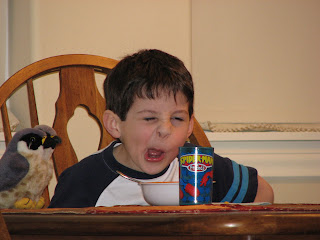 Do you have any odd or weird eating habits? The other day a friend of mine posted on Facebook how her son had bit off all the white tips of the candy corn and left the chewed on stubs in the bowl. Being the candy corn freak I am, I had to laugh at this because I too, have been known to eat candy corn section by section. However, it got me thinking of other weird eating habits I have, as well as my family.
I grew up in the 1970s and cereal was a big deal. I used to eat all the cereal bits out of my Lucky Charms and save the marshmallows for last. When I ate Fruit Loops, I slowly picked out the loops by color. As a kid, I'd sometimes sprinkle dry Nestle Quik over my Cheerios. One of my friends and I used to love smashing up nacho cheese Doritos into little pieces and eating the crumbs. Weird, I know. M&Ms, Skittles, and jellybeans were sorted by color. Jelly Bellies have to be eaten by color, unless you mix them just right. Ever toss a handful of those in your mouth at once? Ick -- some flavors don't mix. Also, when I was growing up, my mom's best friend used to eat her meals one course at a time. She'd eat her vegetable first, followed by the meat, or whatever was being served. She couldn't take a bite of one thing and then a bite of another.
My kids have their own weird eating habits. The other day Nathan said he was going to make himself lunch. I asked what he made and he said, "A waffle sandwich." Turns out, a waffle sandwich is 3 Eggo waffles -- 2 on the outside and 1 in the middle to make the sandwich. Okay, so now I'm thinking maybe my chocolate milk Cheerios wasn't so weird. When we were in CA, we lived close to a Wendy's restaurant. Nicole loved dipping French fries into her chocolate frosty. Neil is a very picky eater and reluctant to try anything new right now, so I really can't think of any weird habits he has. One thing he does is smell food, which reminds me of Hawkeye in M*A*S*H. Nichelle doesn't seem to do anything freaky either. However, if we have Skittles in the house, I do notice the red, purple, and orange ones disappear faster than the others. Eventually, there's just a bowl of yellow and green. Someone is trying to pull a fast one on me!
Rick has his own odd eating habits. He's Mr. Ketchup and puts it on everything. God help us if we don't have a Back-Up Ketchup in the cupboard! I think we might have 2 back-ups right now, so maybe he's preparing for winter. He also puts Fritos and potato chips on sandwiches, and then says I don't know what I'm missing when I make fun of him. Even my cat eats weird -- Belle will take one or two bites of food and then walk away from her bowl. Five minutes later she comes back and does it again. I guess that's good. My in-law's cats just sit at their bowls and eat like pigs. I guess we all have our own weird little food quirks. I always thought I was weird for liking baked potatoes plain (cold, with nothing on them), but after seeing everyone else eat around here, I guess I'm in good company.
Posted by Rena Jones at 8:42 AM