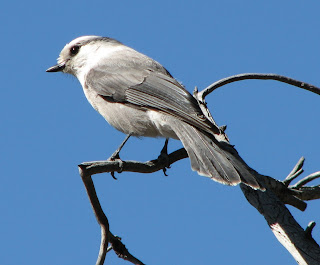 I was born in California and the most common bird I saw were western scrub jays. Like all jays, they are extremely noisy birds. I had forgotten how noisy scrub jays were until we went back to Ojai this summer. Good Lord -- shut the window! When we started traveling north to visit national parks and other forested areas, I finally got to see birds I'd only see in magazines. Those would include blue jays, Steller's jays, eagles, and so on. I never even knew a gray jay existed until Nathan pointed them out to me.
I took this picture when we went to Yellowstone recently. Like the other jays, this bird wasn't afraid of people. As soon as he realized we were having a picnic, he came right up to the tree next to us. Actually, there were two of them, but this is the best picture. In fact, this particular species has been known to eat food from people's hands and is nicknamed the camp robber. Some interesting facts about gray jays are ...
Gray jays are one of the smallest jays in the world.
They only weigh about 2 to 2.5 ounces.
Gray jays store food by wedging it into crevices of trees.
They eat insects, spiders, berries, and mushrooms.
Gray jays cannot open pine cones.
They might even eat mice, toads, and carrion.
Gray jays live in pairs, sometimes with a third juvenile.
Their territory covers 250 acres.
Gray jays breed and build their nest early, in February or March.
Pretty birds, that's for sure. Oh, and just in case you're wondering, I still have the prize for a caption contest. I'll post that soon. I had initially wanted to do a caption contest for a picture I took in Yellowstone recently, but we were limited where we could go in the park because of a fire. I didn't get many pictures that time. I'd still like to do the contest though, so I'm going to feature it with another photograph. It's still a picture from Yellowstone -- just taken on a different trip. I'll try to put that up for you soon ...
Posted by Rena Jones at 2:39 PM