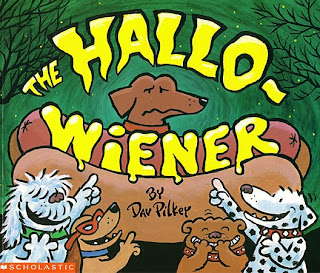 I know I said today's blog would be of the Caption Contest of my elk picture. I'm planning on posting that later on today or tonight possibly. In the meantime, I wanted to mention another fun book the boys and I read yesterday. The Hallo-Weiner is written and illustrated by Dav Pilkey and published by Blue Sky/Scholastic. It came out in 1995, I believe, but I just recently found it at a thriftstore. It's amazing to think I spent a whole DIME on this book! Now, I'm all for authors making money, but it's nice to find a really good book for such a bargain, especially in today's economy.
The Hallo-Weiner is a picture book about a little dachshund named Oscar. The other dogs always pick on him, which really bothers him. However, today is Halloween and that's all Oscar can think of. He's so excited about coming up with a costume, only to find his mom has made one for him. He doesn't want to hurt her feelings, so he ventures out dressed as a giant hotdog. Oscar is mortified -- but will he save the day? Read it and find out!
My boys love Dav Pilkey's books. Nathan can pick them out by the illustrations alone, well before he even sees Dav's name. He's an awesome illustrator. One of my favorite parts was seeing Oscar's mailbox by his house. It reads -- Meyers. Of course, that went right by my boys and they didn't get the joke. I'll have to show them the Oscar Mayer clip I put on my blog awhile back for them to understand. I think Pilkey spelled it with an "e", so it's probably a play on words for Michael Meyers of Halloween and the other company. Like I said, we're big Dav Pilkey fans at our house and have quite a few of his books. This is a great book for Halloween! Have a fun Halloween, everyone, and stay safe! Look for the contest results soon!
Posted by Rena Jones at 7:39 AM