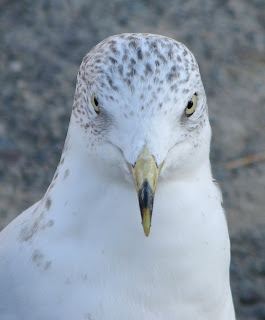 Growing up in Southern California and living less than 20 minutes from the ocean, seagulls are no strangers to me. I remember watching seagulls at the beach, as they ran around the sand looking for food. Whenever someone would feed them, all hell broke loose and dozens more appeared out of nowhere. The last time I was at the beach was this summer and I saw a seagull fly up to a little girl who was eating a hamburger. It scared her to death, but it was just another day at the beach for the bird. Every time I hear a seagull, I think of the Finding Nemo movie -- Mine, mine, mine!
The other day we did some shopping in town. Rick ran in to Best Buy and I stayed in the car with the boys. They were finishing up some of their lunch from McDonalds when we noticed some gulls flying around the parking lot. I never encourage the boys to feed wildlife, but I let them toss out a few French fry pieces this time. The only reason I did was because I had my camera and wanted to get some pictures. A photo of a seagull in a parking lot isn't quite as nice as some of the ones I've taken of them on the sand or on piers. However, I managed to get a few close-ups, so I was happy. Unlike others I've seen, this bird wasn't overly aggressive and took off pretty quick.
I believe this is a ring-billed gull. It was funny seeing gulls when we moved here because like many people, I thought they only lived near the oceans. As it turns out, many gulls live inland and never even see a beach in their lifetime. We have a lot of lakes here and we see many different species of gulls. They spend the summers here, but I believe they migrate south for the winter. Here are some other facts about ring-billed gulls ...
Most return to the same nesting site as the year before.
They eat fish, insects, earthworms, rodents, and garbage.
They nest on the ground and nest in colonies.
They lay 1-4 eggs at a time.
Eggs are light olive colored with brown speckles.
Chicks may leave the nest at one day old.
Their wingspan can be 41 to 46 inches in length.
In the 1800s, they were almost eliminated by hunting.
Posted by Rena Jones at 8:29 AM