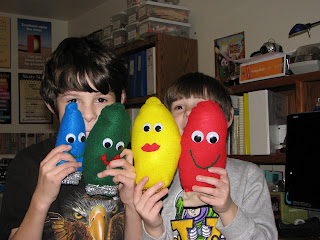 All this week we've done Christmas Lights crafts in school. We have never done this before, so it was fun just because it was new. I posted the little lights we made out of wooden spoons here if you want to see them. Yesterday we made Christmas Light Plushies, which I found online. You should have seen the boys' faces light up when they saw my sewing machine. They've seen it before, but I don't have it out much, so their little imaginations went crazy. Neil said, "Mommy, the only thing I want from you for Christmas is a Santa suit for GI Joe!" Ummm, I can stitch two pieces of felt together and maybe a few other simple things, but I don't think I can deck GI Joe out in full holiday garb.
Regardless, the Plushies were a big hit and I couldn't believe how excited the boys were over something so simple. They wanted to make two each. We did one exactly like the instructions said, but for the others we took silver and gold metallic pipe cleaners and wrapped them tightly around the end to make the base. Then we glued on eyes and mouths. Super simple, but the boys thought they were the coolest things. During the week we also made the Lightbulb Reindeers pictured below. This is an old craft I've seen around for years. In fact, the girls made these when they were in private school back in the early 90s. We still have theirs on our tree. This is a really easy craft for little kids and it's pretty cheap to make. We found a 4-pack of bulbs at Walmart for a little over a dollar. All you do is add pipe cleaners for antlers, glue on some googly eyes, and a pom pom nose. If you want to be fancy, add a Christmas ribbon or maybe a small jingle bell. Fun stuff! 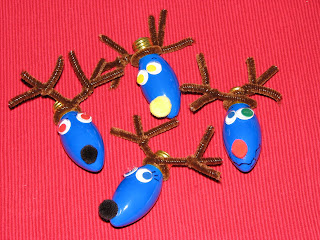