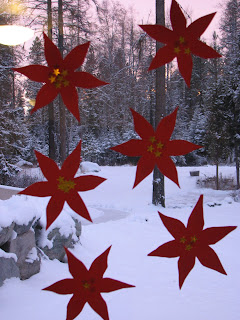 Also known as the -- poinsettia!
I wanted to blog about poinsettias this year, but realized I missed National Poinsettia Day, which was on December 12th. Oh well, better late than never. The poinsettia is a flower indigenous to Mexico. It was named after Joel Roberts Poinsett, the first US Minister to Mexico (this was before we had Ambassadors). It is said he liked the flower so much that he brought it back to the US to cultivate it and give it as gifts for Christmas. The Legend of the Poinsettia is a story about a poor little girl who was sad that she had no gift to give at Christmas Eve service. She picked a bouquet of weeds and presented them at the nativity scene. The legend goes onto to say the weeds burst into the bright red flowers of the poinsettia because the little girl gave them with all her heart. Here are some interesting facts ...
The boys and I were reading about poinsettias the other day in their Christmas Bible program. There was a simple craft (above pic) to make flowers using red construction paper. Since this was a Bible program, they were referring to the star shape of the poinsettia to remind people about the star of Bethlehem. Instead of using yellow paper dots for the center, we used gold stars on both sides of the flowers. They look neat hanging on the window of our classroom door, especially with the snow behind them. I don't usually buy real poinsettias. I was always under the impression that they were highly poisonous. I didn't realize they were not. I see them all over the place, so I assume they do okay in people's homes in Montana. For now though, I'll settle with the bunch of artificial ones I have -- they stay pretty year after year! Do you buy real poinsettias for Christmas?
Posted by Rena Jones at 7:51 AM