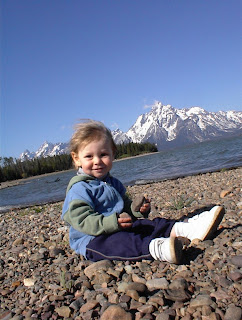 CROOKED ... that is the question! I was going through some old photos the other night. Both Nathan and Neil were born right about the time we switched from film cameras to digital. I found this one that Rick took of Neil in Grand Teton National Park in 2003. I remember Rick saying he was going to crop it so it wasn't lopsided like this, so I started to do that on PhotoShop. I did it several times and it just didn't look right. Well, it looked right in the sense that it was straight, but it looks better crooked. At least it does to me, but maybe that's because I'm used to seeing it like this. It's a weird shot because Neil looks straight, but the scenery is crooked. So anyway, I decided to leave it alone. It's one of my favorite pictures of Neil when he was little. He had this beautiful blond hair and I used to let it grow pretty long at times. He was such a cute little baby.
I stayed up until 1:30am working on my computer, so I'm sitting here sipping a cup of coffee and trying to wake up. I finally figured out what to give my in-laws for Christmas. I have a few small gifts for them, but I wanted to give them something else, so I decided to make them something. I'm not all that crafty, to be honest. I can do stuff with the kids, but when it comes to grown-up crafts, I'm not that talented. So, I decided to do what I was good at -- desktop publishing. Every year I make my kids a yearbook for school that is pretty much like a digital scrapbook. I decided to do something similar for our vacation this summer when we visited my in-laws in California. I'm organizing all the best pictures, cropping them, adding graphics and notes, and then I'll use my binding machine to turn it into a nice book for them. It's a lot of work, but this is my thing, I suppose. I love doing this stuff, and hopefully, they'll enjoy the keepsake. And the bonus is that I get one too!
Posted by Rena Jones at 10:05 AM