Are you a thumper? 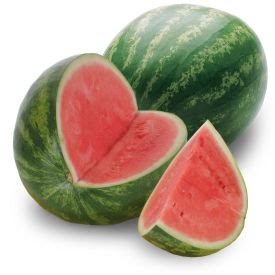 I'm not talking about little critters from Bambi here, but watermelons. Do you thump yours to see if they're ripe? Earlier this month when my in-laws came to visit, I bought a small, seedless watermelon. I've never thumped them, mind you, and I've rarely ever gotten a bad melon. This one wasn't bad, but it just wasn't sweet. We ended up tossing it out. Well, my mother-in-law wouldn't let me hear the end of it -- "Did you thump it?" and "You have to thump it!" and "I always thump mine." As I said, I'm not a melon thumper, so I didn't know how to respond. Rick wasn't as reserved, since it's his mom, and told her she was crazy. Later I found out from Nichelle, who works at the market I bought the melon at, that others weren't sweet either. I don't know what to think and maybe the whole lot was just a bad batch.
The other day I was looking up chili peppers in a book we have on produce. I came across the melon section and it said thumping watermelons doesn't do any good. Now, you might be a thumper, and by no means am I trying to make anyone mad here. Maybe it works for you. However, this book said it wasn't an effective way to tell if a melon is ripe. It says the best way is to press on the bottom, or the opposite side that the stem grew on. There's usually a little round area. If the melon is ripe, pushing on that should give in just a tiny bit. It also says to smell it, but I've never been able to pick up on much that way. The skin is so thick and I don't have the nose of a bloodhound, so I don't know what I'm sniffing for. But anyway, since I didn't know if my mother-in-law knew what she was talking about (which she usually doesn't), I felt a little vindicated on being such an idiot for not thumping my watermelon like she always does. Of course, when I looked online, there are tons of articles written on watermelon thumping. Some go into detail about the thump duration, whether its deep or shallow, etc ...
A few nights ago Rick and I were at the market in the produce section. I saw a man wearing what looked like medical scrubs by the watermelons. He picked one up, placed it gently on his shoulder, and then proceeded to thump it a few times. He was very intent on listening and obviously took his watermelon thumping seriously. He finally picked two of them and went about his business. I honestly don't know. Maybe thumping works, but then again, maybe it doesn't. I stood there watching this guy, not knowing whether to laugh or take him seriously. In the process of me standing there like a goon, I bumped into a coconut and it dropped onto the floor, splashing coconut milk on my toes. Serves me right, I guess. I think I'll try the pushing method next time, but who is to say that's effective. As I said, I've bought hundreds of melons in my life and very rarely had a bad one. Some have been better than others, obviously, but I don't know if any amount of thumping, pushing, or sniffing really matters. For all I know, that last watermelon I bought could have been unsweetend from a hundred people thumping the hell out of it!
What do you think?
Posted by Rena Jones at 10:24 AM