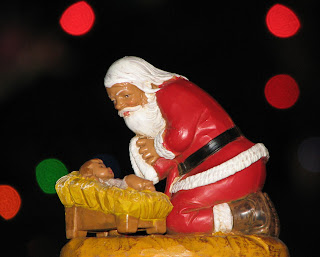 Well, our last day of school was Friday, so we're officially on our Christmas vacation now. I think it really sunk in this morning for the boys, rather than over the weekend. Neil came into my bedroom this morning all smiles and said, "No school today!" Anyway, this picture is of a figure I keep with my Nativities. Santa and the Christ Child is a pretty famous story and figure, but mine is pretty small, not to mention inexpensive. I was mostly playing around with the lights on the tree and trying to see if they'd show up. That was hard because they were blinking.
In other news ... it feels like winter has skipped northwestern Montana for now. We've had some snow here and there, but not nearly as much as we usually have this time of year. I see snow in our yard, but it's all melted off the deck, which is weird. There is snow on the forecast, but it doesn't look like much. And, it looks like a lot of it will come after Christmas. I'm curious if we'll have our first Non-White Christmas this year. That will be really odd.
The past few days I've been editing one of my middle grade novels, so that's taken up most of my time since we let out of school. The story is called ENCROACHED. It's about two young girls who venture out alone to camp in the Montana wilderness. I've read the story so many times that my eyes are acting all funky. It's amazing how you can read something over and over, and still find a typo or error somewhere down the line.
I hope everyone has a great week!
Posted by Rena Jones at 10:41 PM