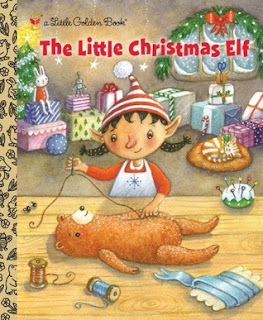 If you're interested in adding a new picture book to your collection this year, check out The Little Christmas Elf. Written by Nikki Shannon Smith and illustrated by Susan Mitchell, this Little Golden Book is a delightful story. Nina, the smallest elf in Santa's workshop, doesn't finish the teddy bear she's been making in time to be loaded onto Santa's sleigh. He encourages her to not give up, so she works late into the night to finish it, even after Santa has left to deliver presents. Finally, her teddy bear is complete, just in time for Santa to return in need of one more present. It's an adorable story and a must have for any LGB fan or collector.
Nikki is a friend of mine via Facebook and she's just as sweet as her book. I was surprised to learn that The Little Christmas Elf was her first published work. Getting in with Little Golden Books isn't easy and she explained that she had been at a writer's convention over a year ago where she had her manuscript critiqued. She had almost given up on it when she received an email from an editor at LGB asking if it was still available.
Success stories like Nikki's are encouraging to me as a writer of picture books. In addition, I'm also a huge fan of Little Golden Books. When I found out Nikki's book was going to be published by LGBs, I knew I'd have to add it to my collection. For me, having a book published by them would be a dream come true, just as it is for Nikki. Dreaming wildly for a moment -- I could totally see my first story, Manny the Mountain Goat as a Little Golden Book. Who knows -- maybe that dream might come true sometime. You can find The Little Christmas Elf at any bookstore. I found mine at Walmart.
Posted by Rena Jones at 11:03 AM