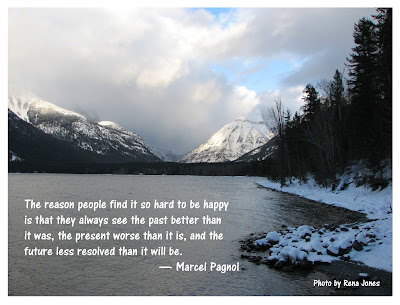 I recently read an article titled 13 New Year's Resolutions Everyone Should Make. Now I don't put a whole lot of stock into resolutions and things like that. I think it's a good opportunity for people to set themselves a goal and try to achieve it or stick with something. I don't see resolutions as a bad thing. These are the ones that were listed in the article:

Some of these are great. I especially love the idea of learning something new. I once made a New Year's resolution to learn how to cross-country ski. That was right after we moved to Montana. I gave it a few tries, but I found it was very painful on my feet. I've had surgeries on both feet, so certain activities or even shoes can really make them flare up. As much as I wanted to get into XC skiing, it just didn't work for me. I took up snowshoeing instead, which is just as fun because you can get out there in the middle of nowhere. Plus, it's a lot easier to lug my camera along without the fear of crashing into a tree or getting stuck in a groove.

There are some other great ones on this list, such as volunteering, paying off debt, and making every day count with your kids. Those are pretty much no-brainers. I'm not a smoker, so that doesn't apply to me. And it's hard to kick the car habit living in Montana where everything is so spread apart. I don't drive every day, however, so I guess I'm already doing that. I love the one about rediscovering the library. I think everyone should do that. However, the library in my town is about as large as my book collection, so it's not really worthwhile for me. The one up in Kalispell is larger, but then again, now we're adding a 21 mile one-way trek up into town. See my dilemma? I don't seem to lack in the sleep department either — thank goodness.

I've been thinking about what type of resolutions I'd like to make for 2013, if any. I'm not coming up with too many ideas. There are some unfinished projects I have lying around, so perhaps I can set a goal to finish them. I have some school stuff that I've really wanted to get done, including a few year books. I also have a very large latch-hook rug kit that I began many years ago. I've always wanted to make it a wall hanging for my staircase. Maybe I can dig that out of the closet and work on it. Then there is the usual stuff of wanting to eat better, exercise more, get healthier, blah, blah, blah. Again, that's a no-brainer and hardly worth me even mentioning. In fact, most of this list is the standard when it comes to resolutions.

How about you — have you set any resolutions for the New Year?