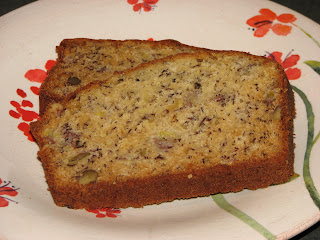 As soon as the holidays start rolling around, I start with all my crazy Christmas cravings -- eggnog, fudge, rum balls, divinity, sugar cookies, peanut brittle -- you name it. I'll even crave the dreaded fruitcake that most people loathe. Right now I'm craving banana bread. Sad thing is, the only bananas I have are frozen and I don't have any walnuts. The good news is that I found a banana bread recipe online that uses frozen bananas and has no nuts, so I'm going to give it a try. I just need to thaw out my bananas. I keep them in the freezer to use in my shakes, but I've been out of protein powder for awhile, so they're just sitting there.

I did go to a liquor store the other day and bought a bottle of Captain Morgan's Spiced Rum. It was funny when we were in both California and Washington recently and we saw liquor in the grocery stores. It's not sold in grocery stores in Montana. They only sell beer and wine. If you want hard alcohol, you have to go to a liquor store. Most of them close around 7pm. I don't buy hard alcohol very often, so it's weird when I think about having to go to a special shop for it. I plan to make rum balls soon. That recipe uses walnuts also, so I need to pick some up next time I go shopping. My friend Sharon got me hooked on her rum balls in 2008, and now I make them every Christmas. You can find the recipe here on her blog, although she hasn't updated it in about a year so I don't know if it's still active. I did find the recipe there, all the same.

My daughter Nicole is coming home from college next Friday. She's already said she wants to make some fudge for Christmas. I might have her try Kim Kasch's recipe that she posted here on her blog. It sounds super easy. I know the boys will want to do sugar cookie cut-outs. They love doing that every year. And Neil really loves gingerbread men, so I know he wants to make those as well. Seems like we're going to have a lot of baking coming up in the next few weeks.

Is there something in particular that you just HAVE to bake during the holidays?