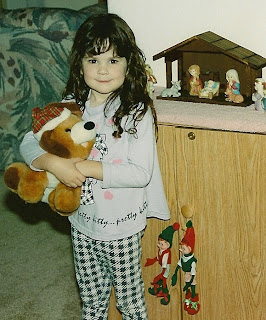 This has always been one of my favorite pictures of Nicole. I remember the day she got that puppy. We were at a brand new Walmart that had just opened up near our home in California. She saw the puppy on the shelf and grabbed it. It was a musical toy that barked out a Christmas song, although I can't remember which one. After listening to the puppy bark, Nicole hugged it as tight as she could and said, "I love him!" Oh my goodness. How could any parent NOT buy the silly thing after that? We still have the puppy, although he no longer barks out his song. He does have a plaid hat and bow, which is way cool.

The elves in this picture belong to the girls. We still have them. They ride in the back of a little wooden sleigh that I keep a stuffed Santa in. I found the sleigh at the dump, of all places, and blogged about it here. The girls' names are written on the elves hats. I wish I could find more of these elves. My siblings and I all had our own elves when we were kids. I thought it would be fun to get them for my kids, too. Since the boys came along, I haven't found any like them. I need to look again. These seem to be different than the typical Elf on the Shelf ones available today. I looked on eBay a few years back for vintage elves, but dang ... the cost of those were outrageous. Maybe I'll luck out and find one at the thrift store sometime.

Speaking of the Elf on the Shelf thing ... does your family do that? I saw the book and toy in stores a few years back, but I never got into it. I wonder how many families actually do the elf thing in their homes. I was just reading about it and how the picture book was actually self-published. The manuscript was rejected numerous times, so they self-published it and came up with their own company. By the end of 2010, they had sold over 1.5 million copies. It has even been turned into a television show. Wow, talk about a success story!