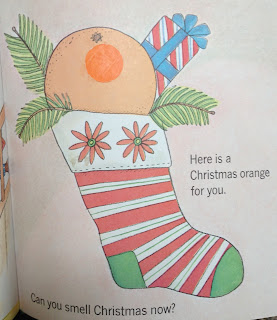 The picture above is from my all-time favorite Christmas book, The Sweet Smell of Christmas. It's been one of my favorites since I was little. The pages are filled with scratch & sniff stickers, including one of a juicy orange. Did you ever get an orange in your stocking on Christmas morning? Trying to remember back when I was a kid, which was like a million years ago, I don't think I got them. I might have and just don't remember.


There are many stories why people receive oranges in stockings. Probably the oldest dates back to St. Nicholas. It is believed he tossed bags of gold into the socks of three young girls who had no dowry and were unable to marry. The story says that the bags turned into gold balls, and therefore, oranges in stockings represent that gift. Other people claim that since fresh fruit is harder to come by in the winter months, receiving an orange in your stocking was considered a very special treat.

Maybe that's why I don't remember getting oranges on Christmas Day. I grew up in Southern California and my house was literally in the midst of acres and acres of citrus orchards. Oranges were a staple. If we didn't have any in the house, it was just a hop away to a grove that did. This was back in the 1970s mind you, and our neighbors didn't mind the local kids picking an orange or two as they walked home from school. My best friend's dad had a huge orange business. My childhood playground consisted of orange orchards as well as other citrus fruits. There used to be this enormous avocado tree that we'd play in. It was huge like a circus tent. Oranges to me were like apples were to people in Washington -- common and plentiful.


Besides oranges, I also ate a lot of tangerines and tangelos as a kid. I loved both. Apparently, tangelos are a cross between a tangerine and a grapefruit. Both were easier to peel than the typical orange, so maybe that's why I liked them so much. I don't know if they sold Cuties when I was younger, which are found all over the stores this time of year. Those are really good. I just finished off a bag of them recently. Last night we were shopping and I decided to buy some more. Safeway didn't have any though, so I came home with a bag of Satsuma mandarins. I like these a lot more than the Cuties. 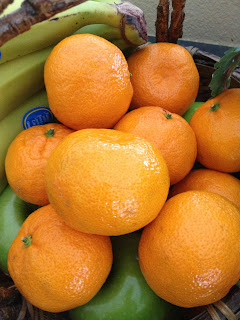 Anyway, we have a whole slew of Satsumas in the house right now, so I don't think getting one in my stocking would be all that exciting. Now ... a chocolate orange might be another story!