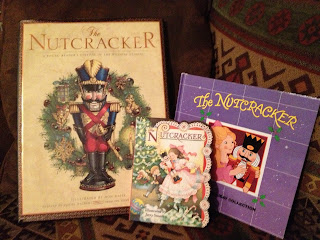 Are you a fan of The Nutcracker? My family has always loved the story. We've seen several plays, watched some movies, and read some books. These are a few of the books we have pictured above. There have been some performances of it locally this year, but we haven't made it to any of those. I would like to see it again sometime. I really love listening to the entire version of The Nutcracker Suite. The girls and I have done Nutcracker Week for school, but I don't think I've done that with the boys yet. I know they want to. They have a funny fascination with nutcrackers. Neil likes making their mouths open and close while he runs around saying, "Ya, ya, ya, ya!" When he was little, he called them "Ya Yas" instead of nutcrackers.

When I was in grade school, our class performed The Nutcracker as a Christmas play. I was a Russian dancer. I don't recall any specifics about the part itself. Weren't the Russian dancers supposed to represent something like candy canes? If so, I don't have any recollection of that aspect of the dance. All I remember is making a tunic-like top out of red crepe paper and a huge black hat from construction paper. Then we had to wear a black leotard and black tights under it. We had to do some funky dance, too. Sadly, that's about all I remember of the entire thing. Funny how making the outfit as a craft project stands out more in my mind than the performance itself. Knowing me, I was probably scared to death. I was petrified on that stage.

I've been collecting nutcrackers since 2002. My collection is in the picture below. I don't collect any expensive ones, as you can see. I've seen some that cost a pretty penny. Most of mine come from places like Target, Kmart, Shopko, or Jo-Ann Fabric stores. I rarely spend more than $10 on them. This picture shows them in order I got them. They all have the year printed on them. The one on the right end is for 2012 and it's a police officer. As soon as I got him, I went into another store and found a cool Elvis one. It was even a buck cheaper. I thought about returning the police one, but then decided not to. Maybe I'll find Elvis in 2013. I'm sure he'll be around. After all, Elvis is always being sighted somewhere!