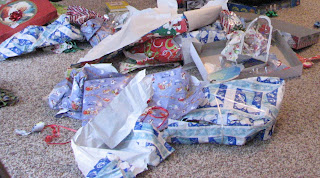 It's that time of year again -- the time I dread. I'm talking about the day after Christmas where nothing seems to have found a place yet. Fortunately, this year isn't too bad. I guess my whining paid off because everyone was pretty good about picking up their gifts and putting them away. There are a few things left out still -- like a pile of clothes Neil received -- but most everything is picked up. Now we just need to make a trip to the dump to get rid of all the trash because it's really piling up. I'm not in any hurry to do that though because that means driving the van with the trash cans down the icy road. Going down isn't a problem, unless you're sliding out of control. Getting back up the road is the tricky part. I'm really not complaining though. We were blessed this Christmas. A little clutter never hurt anyone. Everything is a matter of perspective, right?

Someone asked on Facebook today when everyone takes down their Christmas decorations. It seems some people do it immediately after Christmas, but others wait until New Year's Day or the Epiphany. Back when we had a fresh tree, we had to take ours down fairly soon after Christmas. Fresh trees dry out so fast and the fire danger was just too big of a worry. Now that we have an artificial one, we tend to leave it up longer. We'll probably take everything down around New Year's Day. Even though it's been up since Thanksgiving weekend, it still feels like we just set everything up. This is the one time of the year I get to enjoy my nativity collection. I have over 67 sets, so I'm in no hurry to pack them all away just yet.


I saw another question Facebook this morning that I thought was interesting. I think it was posted by the Retroland site. Have you visited that place? It's a lot of fun. Anyway, they asked if there was ever something you wanted to get for Christmas but never received. I thought about that for a moment and then remembered I had always wanted a Magic 8 Ball. Remember those things? I'm not sure why I wanted one so much, but it's something I never got. I always played when them in the stores. This year Nathan gave Neil a Magic 8 Ball. The boys are familiar with them because they're featured in one of the Toy Story movies. The boys and I were playing with one at the Navy base in CA last month. I had just meet Anthony Kiedis the day before, so I asked it if I'd meet him again. It said yes. Oh yeah, baby ... I love you, Magic 8 Ball!

I can think of a few other things I wanted as a kid, but never received for Christmas. The Barbie Dreamhouse was one. I asked for that thing every year, but never got it. Again, my girls later got one, so I was happy. Another thing I always wanted was a Toss Across game. Did you ever play that? I played it at my friends' houses, but it was one thing I never received. I wonder if it would be as fun as I remember?

One of my favorite scenes from a Christmas movie is from The Santa Clause 2 when Scott Calvin goes to the school faculty party with Principal Newman. He does the Secret Santa thing and gives everyone all these old toys that they wanted as kids but never got. I've looked for that scene online, but can't find it. Maybe you know what I'm talking about. It's a fun scene, especially for someone like me who loves old, retro toys.
Posted by Rena Jones at 1:33 PM