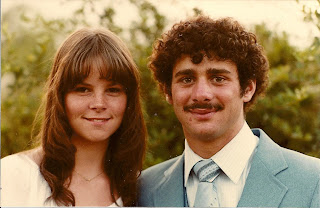 Today is the 28th anniversary of our very first date. I met Rick in high school in 1981 through a mutual friend. Oddly, I was in my sophomore year when we met and neither of us remember seeing each other the year before. I was supposed to be in tennis class, but instead I was standing by the pool talking to Amy, who was an aide for swimming. Rick was an aide for that period also. As soon as I left, he asked Amy who I was. A day or two later he walked up to me on campus and said, "You wouldn't want to go to the tennis dance with me, would you?" I said yes, and I've been with him since.
The Ojai Valley Tennis Tournament has been going on for 109 years. Each year, thousands of people gather in Ojai, California to watch amateur tennis players compete from all over. If you look at the website under "history" you will see some pretty famous names of people who have played in this tournament, including Billy Jean King, Jimmy Connors, and Tracy Austin. During this 4-day event, there is usually a dance held at the local high school. That's the dance Rick & I went to on April 24, 1981.
It's funny the things you remember. I remember going shopping with my sister to find something to wear to the dance. I couldn't find anything I liked! I ended up buying an animal print top and wore that with some brown corduroy pants I already had. I remember standing by a wall with my arms around Rick and he said he could feel my heart beating. I also remember him fiddling with a small gold heart necklace I had on. He asked me where I got it, and after telling him it was a gift from my mom, he seemed relieved. After the dance, his friend Bruce suggested we go someplace else, but Rick was a gentleman and said no. He took me home and asked me to go see a movie the next night. I said yes. We watched Caveman with Ringo Starr, which was probably one of the stupidest movies we'd ever seen. Rick graduated that same year, which was when this picture was taken right after the ceremony. That fall he went away to Pepperdine University, where he was a pre-med major. Unfortunately, money was a problem and he could only do one year there. We dated for 7 years before we finally got married in 1988. We always knew we'd get married, but we wanted to wait until Rick was settled in a career first. Twenty-eight years and four kids later -- here we are still together, a lot older and hopefully, a little wiser. Like all couples, especially ones who've been together this long, we've had our ups and downs. Mostly those have been ups and there haven't been too many downs. I've been blessed to have someone like Rick in my life.
I love you, Rick -- Happy 28th Date Anniversary!
Posted by Rena Jones at 9:09 AM