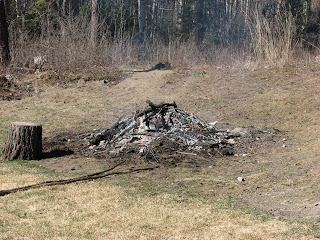 One term I wasn't familiar with before moving here was slash pile. A slash pile is debris from brush, leaves, or wood. Nearly everyone here has a slash pile. Basically, it's just a big firepit. We're not supposed to dispose of brush, leaves, or fallen wood in the trash bins. I remember regular burn days in California, but that was done mostly by farmers and ranchers. Up here, nearly everyone has a slash pile. There are specific burn days, and sometimes there are restrictions if the weather is really hot or there is extreme fire danger. I believe you're able to have a warming fire anytime, but there are limits to how big you can make it. Sometimes you see slash piles that are enormous. Awhile back they took down some trees across from my house and the fire there got to be as tall as the roof of my house. Coming from California, and dealing with brushfires, seeing these fires here is unnerving, especially because they're often unattended. Sometimes they burn for days.
We have a lot of fallen branches and dead wood laying around, so we use our slash pile quite a bit. When we first moved here I wanted to get rid of it. I could see the area that the previous owners used and I didn't like how it looked. As you can see from this picture, it's pretty ugly. We've since circled it off with rocks, so now it looks basically like a big firepit. Sometimes we'll be out there cleaning up fallen and rotten wood and we'll get the fire huge. Other times we just make a small campfire, crack open some beers, and pull up some lawn chairs. It's kind of cool. It can be a little freaky at night though because you can only see the fire. Hearing sticks snapping up on the hillside only means one thing -- animals! And with the fire burning, you're really limited to how much you can see at night. All the same, it's kind of interesting because it's not something we did in California. We had a small firepit at our house there, but we put that in when we had the house on the market and we hardly ever used it. Up here, it's just a standard thing.
Posted by Rena Jones at 5:09 AM