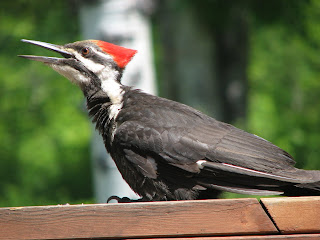 Do you know anyone with brown eyes and red hair? It's pretty uncommon from what I've read, due to the combination of chromosomes and genes. However, pileated woodpeckers have brown eyes and red hair. Okay, so they're feathers, if you want to get technical. I took this picture a few weeks ago. Click on it to see her close-up. I heard a strange noise and when I looked outside, there she was. She was checking out the bird feeder, though she never actually jumped up into it. She seemed more interested in resting and often had her beak open as if she was hot. She sat there for a long time, just watching me and preening herself. I knew she was a female because she didn't have a red streak near her beak. Only males have red moustaches, so they're easily to tell apart. She was big too, like the size of a crow. Some interesting facts about pileated woodpeckers ...

This picture was taken through my window. Had I opened the door, she would have flown away because she was only a few feet from me. I often joke that I'm an indoor wildlife photographer, since a lot of my pictures are taken from the inside of the house. I'm fortunate to be able to see a lot of interesting critters where I live now. I finally broke down and had to wash my windows yesterday because they were starting to put a damper on my photographs. As I sit here this morning, I can hear a pileated woodpecker drumming a short distance away. It keeps getting drowned out by the stupid turkeys who woke me up this morning with their gobbling. In between the two, I also hear robins and chickadees carrying on, plus the squirrels chirping. I swear, this place is an absolute zoo sometimes!