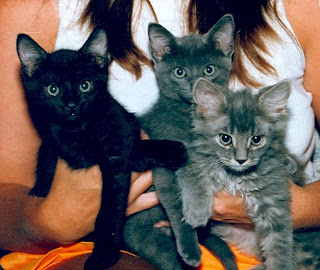 Today is National Homeless Animals Day. It's a day set aside to promote education about the important of spaying & neutering your pets to help with animal overpopulation. I'm a big supporter of that idea. Back in the 1970s when I was growing up, the spay/neuter thing wasn't talked about or enforced as much as it is today. I grew up with cats -- lots and lots of cats! I'm convinced that every cat in the Ojai Valley stemmed from my cat, Missy. I'm more aware of the problem now and I wouldn't dream of owning a dog or cat unless I had he or she fixed.
See these kittens above? They belong to my in-laws, but they're fully grown now. We found them near my ILs house one day. They had been born outside and were totally wild. We found the little black one first, and the gray one in the middle second. The day we found them, my ILs were leaving on a trip, so I took them home to take care of them while they were away. I named the black one Samson and the gray one Delilah. Their names were later shortened to Sammy & Deli. The other little gray one on the right I found a few days later. He was skin and bones, and totally covered with fleas. Not only that, but he was covered in dirt and cobwebs. I named him Dusty. He's the one I posted about recently -- the one I call Pretty Boy. My in-laws really didn't want to keep the cats, but we talked them into it. I am pretty sure the cat we have now, Kitty, came from the same parents. She was totally wild when the girls started feeding her. Fortunately, our neighbor got ahold of some of the cats and had them spayed and neutered, which seemed to help with the cats showing up on our property.
When the kittens were little and I would be watching them, I'd yell out, "Baaaay-beeees!" and they'd all come running. They knew that meant they were going to eat. One thing that struck me funny was that this was YEARS ago. Just recently, while I was visiting my ILs in California, I said, "Baaaay-beeees!" and both Sammy and Dusty jumped up. I had no idea they would remember that. Deli was still being boarded because she is bad about using her box, so she got stuck in the slammer while we were there. I wonder if she would have had the same reaction. But it was hilarious how they remembered like that. At one point, we were looking for Sammy and couldn't find him, so I yelled "Baaaay-beees!" again. Sure enough -- he popped out of his hiding place and came running. It was the craziest thing how they remembered ... they were the cutest little baaaay-beeees!
Posted by Rena Jones at 12:06 AM