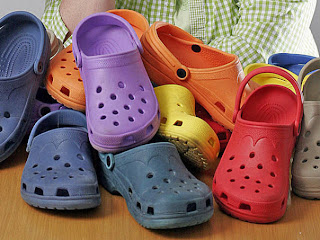 Here's a question -- do you love them or hate them? The reason I ask is because a few weeks ago I was reading an article that said the popularity of Crocs was dying down. One of the reasons given was because the shoes lasted so long and people didn't need to buy more. Then I looked at the Crocs website and saw they have a huge shoe line. I thought it was interesting that there were so many types. However, I'm not one for malls or going to shoe stores all that often, so it really shouldn't be a surprise.
When I first saw people wearing Crocs, I thought they were ugly. They reminded me of those other plastic shoes that came out in the 1980s called jellies. I had a pair of clear jellies, but I hated wearing them because they made squooshy sounds when I walked. They soon became known as farty shoes and I couldn't wear them. When Crocs came out, I figured they'd be the same way, so I had no interest in trying them. Besides that, I thought the colors were too bright and gawdy looking. But then ......
Last February Rick & I went on that trip to Las Vegas for our 21st wedding anniversary. I packed mostly my cowboy boots, since I don't get to wear my fancier ones all that much with the snow, rain, and mud. I thought Vegas would be a cool place to wear my suede green boots. What I didn't think about was not having a car. We flew in and didn't rent a car, so we did a lot more walking than I had anticipated. I was near tears when we finally went into the MGM and saw the Rainforest Cafe store. By that point, even Crocs were sounding good. I bought a pair of black ones and after rubbing my feet raw with my boots, the Crocs felt like I was walking on clouds!
I still wear them, surprisingly, but only with socks. I don't really like how they feel when I'm barefoot. I'm not sure if I'll buy another pair, though the boots on the website look cool. I might like those and maybe the blue ones to wear with jeans. I might consider getting some for the boys once they grow out of their current water shoes too. Up here, we spend a lot of time in the lakes and the bottom is really rocky in places, so you have to wear shoes. Flip flops don't work and the boys usually wear those pull-on water shoes. I've seen people wearing Crocs, including professional kayakers, so that might be an option for them. That is, if they stick around awhile longer!
Posted by Rena Jones at 9:58 AM