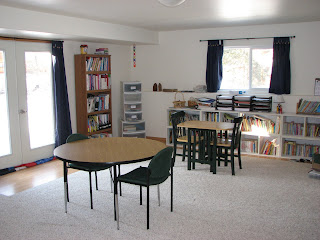 Yesterday the chaos began -- I'm starting to organize my classroom for school. It was a complete mess down there. I haven't spent much time in there all summer. We homeschool and our office is used as a classroom. It's part of the basement. This picture was taken right after we moved in. The room looks nothing like that now. Picture the same room, but 100x more cluttered. Picture the tables piled high with junk. On top of it, this picture only shows a portion of the room. I tell you -- it's scary in there!
Normally, right before school starts, I gather all of the last year's papers and organize them into big 4" binders. Then I clean up the room and organize all the new books and materials we'll be using for the next year. It's usually a simple process and since I've been doing it for 11 years, it's no big deal. I haven't done much with the room since we moved in, so it's been the same for 3 years. Yesterday I began moving everything around. By everything, I mean -- everything! All the bookshelves, all the tables, all the plastic drawer containers, etc. I think I have things where I want them, so now it's just a matter of organizing everything. It's a good thing we're not starting school until the 8th. I've been in this situation with the room in chaos where I was starting school the next day, so thank goodness I still have time.
Every year I make a chart for the kids to keep track of all the books they've read over the school year. I try to make a fun picture and then the kids write the names of their books on specific shapes of paper. In the past we've done leaves on trees, ants at a picnic, fish in the sea, dog bones for the beagles, gumballs, etc. Last year I drew a giant jar on a piece of poster board and then cut out pickle shapes from construction paper. I glued a picture of Dilly next to it and the kids filled up the jar of pickles for him. I'm trying to come up with an idea for this year. Some of the ideas I have so far are ornaments on a Christmas tree, nuts for a squirrel, stars in the sky, and bubbles. I'm also playing around with the idea of drawing or printing up a haunted house and then having the boys write their books on little tombstones and ghosts. I still haven't decided what to do, obviously, but I'll figure something out. So anyway, hopefully I can get it organized before school starts. I didn't take any before pictures, so you'll have to take my word that it was a disaster. I'll try to post some after pictures as soon as it's presentable.
Posted by Rena Jones at 7:13 AM