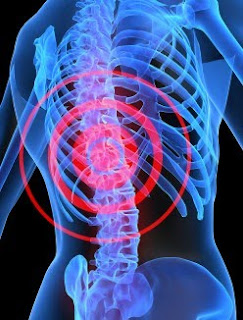 Last night wasn't a good one. I was watching TV around 8pm when I coughed and noticed my chest felt funny, sort of tight. I didn't think too much of it, but when I got into bed, it started bothering me again. I thought maybe I was getting sick. After about a half hour, I knew exactly what was wrong -- my back was spazzing again. I know from past experiences that this will not get better or go away by itself. It only gets worse and worse.
The last time I had this happen was in March. It got so bad that I ended up in the ER. They gave me several injections to stop the muscle spasms. They sent me home with Valium and Vicodin. I never needed them because the shots I got at the hospital helped. I'm so glad they sent me home with those because I really needed them last night. Had I not had those prescriptions, I probably would have ended up in the ER again. That's never a good thing. I took one of each pill and then went to the couch for awhile. Being able to lie with my back pressed up on the couch helped a little, at least until the meds kicked in. Once they did, I was able to come to bed and sleep.
I'm not sure what causes this back pain, but I think it has something to do with using the computer. Ironically, I wasn't on my computer much yesterday. I do remember feeling the tightness in my chest while watching TV and then coughing hard. I thought that was odd because I didn't think I was sick or getting sick. I've had this happen to me three times so far and it usually happens at night. The first time Rick was out of town and I barely got through the night. I think I fell asleep around 6am that time. The second time I went to the ER, and then last night I was able to relieve it with the meds. It's a strange pain that's located in my upper back. It's muscle spasms that sort of feel like pregnancy contractions. No position relieves it. It gets so bad that it makes me nauseous and breathing becomes difficult. I'm groggy now, but my back isn't hurting as much. We'll get school done, but I might be a zombie for the rest of the day.
Posted by Rena Jones at 7:41 AM