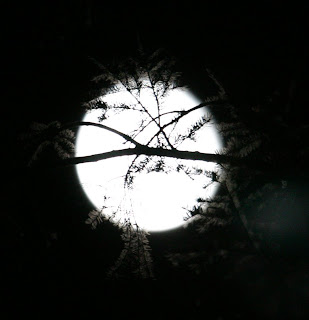 I took this picture of the moon the other night. It's not very good and I didn't get any others that were any better. There are two reasons for this. One, I don't know how to work Rick's camera very well, especially the night settings. Two, it was dark on the deck and I was more concerned about a bear jumping up than standing there fiddling with it too long. By some stroke of luck, this particular picture focused on a branch in front of the moon, so that's kind of cool.
What do you think of the recent moon bombing? Do you think $79 million dollars is worth the effort to find out if there's water or ice on it? I just read an article that said NASA didn't get the photo results they hoped for. The pictures just show gray fuzz. One person said she was thrilled with them and others seemed disappointed. The article mentioned kids watching the event and one ten-year-old sounded disappointed when he said, "I wanted to see the debris flying out."
I don't know -- I obviously don't get it. One blogger posted that people opposed to this are basically idiots because they don't understand human expansion beyond Earth is inevitable. I guess I'll go stand in the idiot line because I don't have any plans to move to the moon. Another blogger posted that 50% of Americans want to leave the country, so we need to explore other places to live. If it costs $79 million to poke a hole in the moon, then how much would it cost for one person to live there?
Like I said -- I just don't get it. Here we are living in times where they want to tax us for our carbon footprints, encourage us to go green, have less children, drive smaller cars and so on to protect the earth. But at the same time they're causing destruction to our moon for research. I always believed the moon's purpose was for light, not life. According to an online poll, 64% think it wasn't worth the money, 34% think it was, and 2% are undecided. Again, I don't get it and that's my problem because I don't know much about it. It just seems like an awful lot of money. What do you think?
Posted by Rena Jones at 9:22 AM