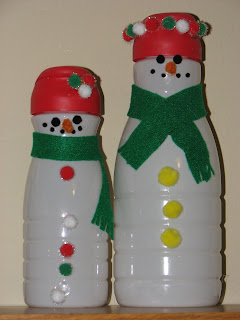 Here's another easy craft you can do with your kids. This one uses empty Coffee-Mate creamer containers. I found this idea online someplace, but I'm not sure exactly what site it was. Click here for another site I found for this project. The boys made these either last year or the year before that. In our family room, I have a big display of various Christmas crafts the kids have made over the years. Mixed in are some other decorations that have been collected or given to me over time. It's kind of a snow scene, even though nothing actually goes together. It's cool because it's such an eclectic mix, and these Coffee-Mate Snowmen fit in perfectly with the rest of the clan.
These are fun for little kids to do because all it really requires is adding details with glue. I think these would be a fun craft for adults to make as well. I'm thinking of making a few more myself. Instead of felt and pom-poms, you could glue plastic holly sprigs onto the hat or add a fancier scarf. The snowmen on the link are sitting on a base of snow made from cotton balls. The ones the boys made stand alone, but I like the snow idea too. They used real buttons instead of pom-poms, and added pipe cleaner arms. They also used orange felt for noses, but the boys twisted up an orange pipe cleaner for theirs. The empty creamer jars are perfect and the red tops look just like little caps. Not only do they make a fun craft, but you're recycling too, which is always a good thing. Best part is -- these snowmen won't melt!
Posted by Rena Jones at 7:06 AM