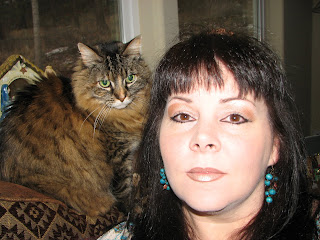 It was with great sadness that we had to put our beloved kitty, Belle to sleep on Friday. It was the day after her 17th birthday. Her condition had gotten worse and we didn't think she would survive the weekend. After putting CJ to sleep 15 years ago, I never thought I'd hurt that much over a pet again. I was wrong. I am absolutely heartbroken.
Belle was with us for 17 years. She was a member of the family. She came into our lives through my sister, who brought her over one night because she thought she looked like CJ. Except for the orange streak up her nose, Belle was a spitting image of CJ. This was around 1993 and we still had CJ at the time, along with another cat named Abby. I suppose that helped two years later when I had to put CJ to sleep. When I came home on that horrible day, Belle and Abby were there to greet me. It wasn't long before Belle took over and began sleeping in my room.
I know many of my friends are going through hard times right now. Some have lost parents, or siblings, or friends. Others are having serious health issues, or dealing with sick children. I suppose to some people, losing a pet might not seem that big of a deal. Some people can go through life with that "it's just an animal" attitude. Not me. Belle was my best friend. She has been with us so long. No matter where I went, she would find me and want to sit either on me or near me. She wasn't a lapcat, by any means, but she was on my lap almost all the time. It had to be on HER condition.
Though it might seem petty or even pathetic to some, I have had an absolutely horrible weekend. As I said, I'm heartbroken. Belle was the first one to greet me when I came into the house. If Rick and the kids were downstairs at night, Belle was always at my side when I was upstairs. Now she's gone. My room no longer has the sound of water trickling from her little water fountain. I can't hear her say "yeah" every time she meowed. It's so horribly silent. I can't sleep at night because she's not lying on me or leaning up on my leg. Every time Rick moves at night, I wake up thinking it's Belle jumping on the bed. Reality hits again and I fall to pieces. It doesn't take much to make me fall apart -- from finding a few cat hairs on my clothes, or seeing the empty place where her bowl used to be, or watching her pictures come up on my digital frame. I'd like for them to be wonderful reminders of her life with us, but right now it just hurts.
As I know from CJ, it will take time before I can sit back and think about all the good times we had with Belle. I guess it's too early for that right now because everything is still so painful. And unlike how it was with CJ, I don't have the other cats to console me. I'm a mess. We do have Kitty, but she's my girl's cat and stays in Nichelle's room most of the time. I feel so empty and alone. I just lost my best friend and it hurts.
Posted by Rena Jones at 10:47 AM