The Girls & Half Dome 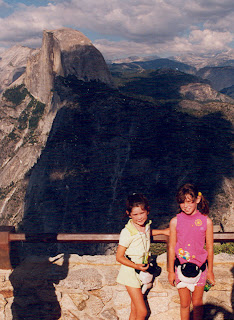 I've been going through some photos and found this one of my girls taken in Yosemite National Park many years ago. I'm not sure of the actual year, but both girls are in their twenties now, if that gives you an idea. Have you ever been to Yosemite? It's absolutely beautiful there. When you go up high and look down over the valley, it just takes your breath away. Not many places do that for me -- the Grand Canyon is one and Yosemite is another. Grand Teton has the opposite effect on me. When I look up and see that mountain range for the first time -- gosh, it's simply breathtaking.
The only thing I didn't like about YNP were the crowds of people. Because it's so central in California, it gets a lot of visitors in the summer. The few times we were there it was jammed packed. I remember trying to get some pictures of the Upper & Lower Falls, but there were hundreds of people in the shot. I mean, they were literally everywhere, including scattered all over the rocks and such. Anyway, it's a great park and definitely in my top ten favorites of the NPs.
I love this picture of the girls. Even more so, I wish we still had those soft, plush Shamu hip packs. We got them at Sea World. I am pretty sure I had one as well, but for some stupid reason, I got rid of it. I don't think the girls still have theirs either. Sadly, I looked for them online recently, but came up empty. They were really cute, so I have no idea why we got rid of them.
Posted by Rena Jones at 1:15 PM