Missy and her Kittens 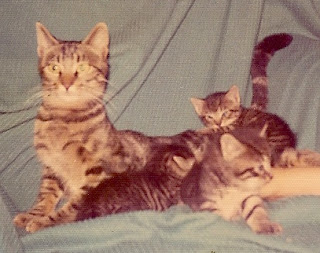 For the past three days I've been going through my photographs. You know how much I love taking pictures, so you can imagine what a chore this is. I have photos all over, including on two different computers, under different user names, as well as in albums and loose. I've had a box of loose pictures under my desk for the longest time, so I've been trying to sort those out.
I came across this picture above, but I'm not sure if I've posted it before. This was my cat, Missy. She was the first pet of my very own. I got her for my 5th birthday, if I'm remembering correctly. She was a great cat. This picture is of her first litter -- first of many, I might add. However, this particular litter was the most unique. I remember sitting with her when she was giving birth. Everytime I tried to go somewhere, she'd jump out of her box and follow me, so I ended up staying with her while she had her kittens.
The first was a male and was born with a tiny stub of a tail. He had a chubby face, so we named him Fat Face. He was my brother's favorite. The second kitten was born with a tail just slightly longer than the first, kind of half the length of a regular tail. She was my sister's favorite kitten and she named her Quail. The third was born with a full length tail and was obviously my favorite because the other two were taken. I named her Princess. Although they were all tabbies, they all had different length tails. It was the strangest litter and the only one like it that Missy had. I suppose because Missy was my very first pet of my own, she's the reason for my fascination and love of tabby cats. Many more followed, including CJ, Belle, and Denny.
How about you -- do you remember your first pet?
Posted by Rena Jones at 11:10 AM