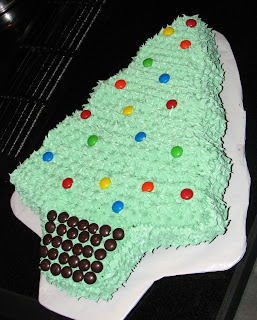 I hope everyone had a nice Christmas. Ours was quiet, but nice. I still have all the decorations up, and I'm not sure when I'll feel up to taking everything down. It seems a lot of people have already done that, but I guess I'm in no rush. It feels like we just got everything set up. Where did December go?
This is a picture of our cake we had for Christmas dinner. Neil asked if I could bake a cake instead of doing the usual pie for dessert. Neil never asks for anything specific to eat, so I really wanted to make it for him. He asked for chocolate cake with white frosting, tinted green. He loves M&Ms, so I figured those would be perfect for ornaments. Neil is my pickiest eater, by the way, so I wanted to make something special for him.
As I was decorating it, I became really light-headed, so I stopped and pulled up a chair. A few minutes later, I knew I was going down. I got up and went to my room and barely made it to my bed before collapsing. Everything went dark for a second. A few minutes later, I felt fine. Nichelle came in and asked if I was okay and said I looked kind of pale. I have no idea what happened. Maybe not enough sleep? It was really weird. Anyway, Nichelle saved the day and finished Neil's Christmas cake -- yay for Nichelle!
Posted by Rena Jones at 1:12 PM