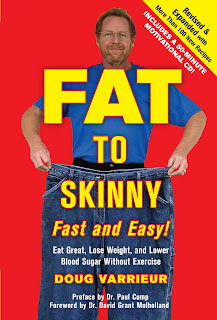 I finally got this book earlier in the week. I've been wanting to get it since it came out last month, but with it being Christmastime, it got put on the backburner. For those who don't know, this is the book that introduced me to low-carb eating. One day Rick came home with the first edition of the book (same cover, but yellow background) and asked if I would read it. Of course, I stomped my foot and whined because I was trying to lose weight by eating less. That obviously wasn't working for me, so I reluctantly read the book. Rick and I both agreed to try low-carb eating for one month -- just ONE month. If it didn't work, we'd go back to what we were doing before, which basically, was being unsuccessful.
I kind of had a feeling it would work. After all, most diets I've ever tried in the past worked for me. The problem was that they were diets and I never stuck with them to keep up the results. Little did I know how quickly Fat To Skinny would work. In that one month, Rick lost over 30 pounds. I think I lost 20 that first month. By six months, I had lost 52 pounds. There was no question about it -- Fat To Skinny worked -- and it was Fast and Easy. I've continued to lose 68 pounds. I still have a few more to lose to be at my goal, but even if I don't, I'm very comfortable at where I am. I deliberately set my goal weight 5 pounds less than where I wanted to be, just to give me some leeway.
I've been able to maintain my weight this past year. Fat To Skinny is a lifestyle change. When people think of eat low-carb, they usually think of giving up bread, cereal, fruit, chocolate, and everything else that makes life worth living for. You don't have to. There's a replacement for just about everything. I eat bread nearly everyday. The only difference is that I make it out of flaxmeal or almond flour. I eat just as much chocolate as I did before, except now I eat sugar-free. Yesterday I had French toast for breakfast. This afternoon I had a chocolate brownie, drenched in chocolate syrup, and topped with a big pile of freshly whipped cream. Doesn't sound like a diet to me. It might not be your thing, but it works for me, and I plan to stick with it.
The book is available at most bookstores and online. If you're interested in losing weight and willing to make a change in your eating lifestyle, then I'm sure this will work for you. And even if you don't want to make those changes, check out the book anyway because I'm featured in the front section. Well, me and a whole bunch of other great people who have had success with the Fat To Skinny program.
Thanks, Doug!
Posted by Rena Jones at 7:04 PM