The One Day Way 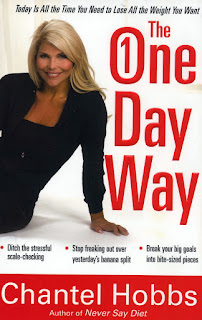 I came across this book the other day at the Salvation Army. As soon as I saw it, I snatched it up like a kid in the candy store. I've been wanting to read it for almost two years. It's a hard cover and I paid 50 cents for the book. You can't beat a bargain like that, although I was totally willing to dish out the $20 for a new copy once I had some extra money. This one just happened to come along first, so I couldn't resist not getting it.
There are several cool things about this. One, Chantel Hobbs is an amazing woman. I don't know her well other than from her books and posts on Facebook. She seems like a fun person. Two, since this book is used, the previous owner highlighted some major factors. She also filled the borders with notes. Now normally, I wouldn't want a book that was written in. I have to admit, I didn't look at it enough to see the notes before I bought it. I was just tickled to find it after wanting it for so long. Once I got it home and looked through the notes, it became even more interesting. Not only did I get Chantel's story, but I also got a little insight of what was important to the previous owner. So, in a weird sort of way, that was kind of interesting.
The book is called The One Day Way and it was first published in 2009. Chantel Hobbs lost over 200 pounds and has kept the weight off for over ten or eleven years now. She looks amazing. Her first book was Never Say Diet, which is basically where she tells her own personal story. I read that book a couple of years ago and it was one of those life changing moments for me. I knew I had to do something to get serious about losing weight and getting myself back in shape. Her book did that for me. It totally motivated me to get serious about doing something. Although I lost my weight going low-carb, which is not something Hobbs pushes, her first book still had a huge impact. This one did also. While many others were out celebrating the dawn of 2012, I sat in bed reading this book. I couldn't put it down.
Basically, in a nutshell, the focus of the book is dealing with today. It's not about setting long-term goals, which are often too hard to reach. It's about focusing on today. It's not about stressing over what you did yesterday. Yesterday is over and done with. It's not about worrying what tomorrow might bring. Chantel encourages people to break big goals into bite-sized pieces. She wants you to celebrate little successes everyday, whether it's not eating those cookies, or just taking the time to go for a walk. Instead of giving up your favorite treat -- let's say ice cream -- Chantel encourages you change gradually. Instead of eating it every night like you usually do, just give it up one night a week. Little changes ... bite-sized changes = success.
If you get a chance to read any of Chantel's books, I'd highly recommend you do. I'd also recommend you read Never Say Diet first, simply because her story is in there. She goes into it a little in The One Day Way, but not as much. I think the first chapter of Never Say Diet is online, probably on Amazon. That's what got me to order the book in the first place. There are so many fantastic lines in The One Day Way that I can't possibly include them all, but I do want to leave you with this ...
"Most people refuse to live in the present. They're either stuck in regrets about their past or consumed with worry about the future -- or both! As a result they don't live for the moment. Their emotions are tied up elsewhere. They have nothing left to give to living their life today! Tomorrow is a new day, but worrying about it can steal today's potential for celebration. Likewise, you need to let go of yesterday. Worrying about what happened a week ago (and continuing to beat yourself up over it) does nothing to help you build the life you desire. You don't have to live that way. You can change your life!"
Chantel Hobbs (The One Day Way)
Posted by Rena Jones at 7:13 PM