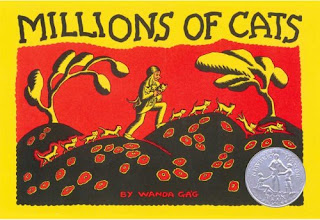 Twice a week I have the boys pick out a book from our home library to read aloud. Sometimes they pick easy books, like picture books, and other times they pick something longer and more complex. Today Nathan read us Millions of Cats by Wanda Gag. The story was written in 1928 and won a Newbery Honor award the following year.
It's a cute story about an elderly couple who are very lonely. The wife sends her husband out to get her a cat. He travels to a hillside that is covered in "hundreds of cats, thousands of cats, millions and billions and trillions of cats". He has a hard time choosing just one because they're all so pretty, so he eventually comes home with "hundreds of cats, thousands of cats, millions and billions and trillions of cats". Things get ugly, as you can imagine, because they can't afford to keep them all. After asking the cats which is the prettiest, a fight breaks out until there is only one cat left.
Did you know Millions of Cats is the oldest picture book still in print? According to Wikipedia, it is, which I think is pretty darn cool. How I would LOVE for one of my picture books to still be in print some 84+ years from now. What an awesome accomplishment for Wanda Gag. We enjoyed listening to Nathan read this story today. After all, I can kind of relate ... 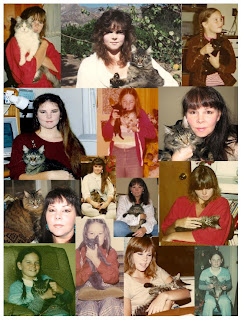