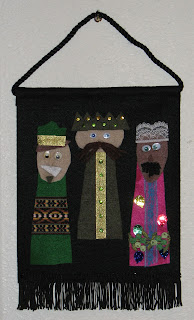 Or, if you prefer ... Happy Epiphany. January 6th is the day when Western Christians celebrate the Magi, or three kings, visited Jesus. Eastern Christians use the day to celebrate Jesus' baptism in the Jordan River. I'm neither Catholic nor Greek Orthodox, so I don't want to butcher the day saying anything more because I really don't know much else about it.
I do know the boys and I made this cool Three Kings banner last year during school. As I hung it up again this Christmas, I still kicked myself for gluing that middle king up higher. Looking at it now, I should have done it the opposite way and had him lower so I could have included a star above him. Duh. I think next year I'll get a big felt or foam yellow star and glue it at the top of the rope. That should do the trick.
I know a lot of people leave up their Christmas decorations until today. We took ours down last weekend. I do, however, keep two of my Nativities out year round. One is a banner and the other is a plate I found at a thrift store. I like the Nativity plate because it's in the living room. Right across the way in the dining area is a similar plaque of The Last Supper. So, I keep both up to represent Jesus' first day on earth and His last day on earth.
Posted by Rena Jones at 11:07 PM