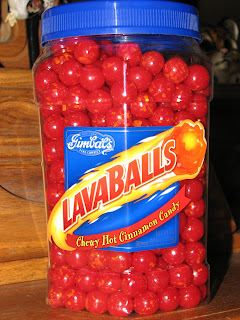 Have you ever tried Gimbals Lava Balls? Cripes -- I haven't eaten any in 2 days and my mouth is still recovering. I ate a bunch the other day and I swear, they burned my mouth raw. I've had them before and this didn't happen last time. I don't know -- maybe I just ate too many at once. The inside of my mouth feels like it's been scrubbed with sandpaper. But dang, these things are SO GOOD! I get them at Costco in big 4-pound jars. The Candy Direct website describes them as "the hottest candy on planet Earth" and I'd say that was about right. I love cinnamon flavored things. I've always said one of my favorite candies were Super Hot Tamales, which go by the name of Fire now. I was never fond of Atomic Fireballs because the hot cinnamon flavor only lasted a short time and it was sweet in the center. You don't have that problem with Lava Balls. They're hotter on the inside and like the ad says, the heat explodes all over your mouth. No wonder why my mouth is so raw.
I'm a big fan of hot, spicy foods. One of my favorite pizzas is called a Hot Hawaiian. It has ham, pineapple, bell peppers and jalapenos. You can't eat it without your lips burning. I also love green olives stuffed with habeneros. Eating those is like a form of self-indulged torture. They're hot as hell, but I keep eating them. When I go to Subway, I usually get a veggie sandwich with lots of banana peppers and jalapenos. I love that stuff. Tonight I'm cooking chicken in my crock-pot. I'll mix a can of cream of chicken soup with a jar of Trader Joe's Habenero Salsa and pour it over the chicken. It turns out really good. Rick can't eat spicy food as much because of his acid reflux and hiatal hernia. Hot foods bother him, but he can tolerate the chicken. I, on the other hand, can't get enough of the hot stuff. My mouth is just about all better and I'm wondering how long it will be before I crack open that jar of Lava Balls again. I'm a glutton for punishment, I guess.
How about you -- can you tolerate hot, spicy foods?
Posted by Rena Jones at 6:24 AM