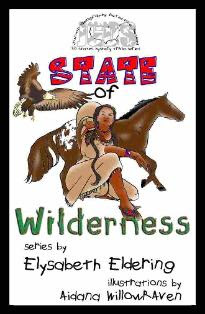 Elysabeth -- Thanks for having me here with you today, Rena. I must say you really made me put on my thinking cap.

Rena -- What was your inspiration for writing State of Wilderness?
Elysabeth -- The first story I wrote, Train of Clues, and entered in a contest in 2005 was the inspiration for the series. I had never really written anything before and when I received a shared second place win, I felt that the story had potential to do more.

Rena -- Did you see it as a series when you started or a single book idea?
Elysabeth -- After winning the shared second place mentioned above, I saw this as a series. I wanted to do something on the lines of the first story, Train of Clues, by giving clues for each state. First, I sent the story to an editor with the SCBWI (Society of Children's Book Writers and Illustrators) and asked for her opinion on how to expand the story out as a series. She sent me some great advice. After receiving her advice and the directions she suggested I could go, I started doing research to find info that could be used for the "clues." I found some clues on the Educational World ® website and then I found a website, quite by accident, that had some trivia type of information for landmarks in every state. I gathered my information and let the idea brew, trying to figure out the best format for the series, that the reader's wouldn't get tired of and that would really be what I wanted from the series.

Rena -- How often will new books in the series come out?
Elysabeth -- According to my publisher, Vivian from 4RV Publishing, one book every three months. But we've had a few setbacks recently and so it looks like books 2, 3, 4 and 5 might be pushed back a bit further than they already are.

Rena -- About how long does it take you to write one of the books?
Elysabeth -- Once I decide what info to use as the clues and sit down and concentrate on the writing process, I probably can write the story in a couple of days. Unfortunately, I don't work that way. But, no worries, the books will be done on my part as they should be.

Rena -- What gave you the idea to make the stories like a game?
Elysabeth -- It was an accidental finding. I had thought of writing the stories for a 5-minute mystery site and I played around with different ideas. I originally was going to do the series like a journal, where the kids would be in a year-round school and would have to keep track on a weekly basis of all in the info given to them to figure out which state was being described. When I saw a posting asking for submissions for the 5-Minute Mystery, I thought maybe my stories would work out for that. I tried to make it as the state being the character and giving each state a personality to give the trivia info to the kids, but that didn't work. I tried making it like a game host asking the questions - kind of a Jeopardy!® type game, but that wasn't turning out the way I wanted. And, then the produces of the 5-Minute Mystery site wanted the stories to be more "geographical" in the story and I was having to either give up story or plot or characters or something and so we weren't meeting in the middle.

When I put it aside for a couple of months or so and after speaking with my illustrator Aidana Willowraven online for a bit, the idea came to me on how to get it across without preaching to the readers. I wanted to make something fun and that the readers would want more of. I have teenagers and figured I could tap into the market that they can relate to, so the Junior Geography Detective Squad game came about.

Rena -- Do you ever tell people not to peek at the end to guess the state?
Elysabeth -- All the time. The first book has a map quiz and flag info and thereby giving the state away immediately. Books 2 through 50 will not have that info, but will have some discussion questions to get the readers thinking caps on and provide more information about the state and clues. I hope the readers will like the information and further their learning by doing the research.

Rena -- How long have you been writing and what inspired you to start?
Elysabeth -- I've been writing about five years, give or take a few months. It all started with a dare on a forum that I frequented. One of my friends dared me to write something and post it for everyone to read and vote on the story. I received some pretty good comments, so wrote a few more stories and posted them. Then, I went off the forums for a while and didn't really write until a friend challenged me to enter the Armchair Interviews fan mystery contest for "Silence of the Loons". Thus, Train of Clues was born.

Rena -- What is your favorite part of the writing process?
Elysabeth -- The end. (laughing) When I put the finishing touches on the story and send it to my friends to edit is the favorite part.

Rena -- How do you market your books?
Elysabeth -- This is tough. I really have just been getting out there and making folks aware of the first book, State of Wilderness, and the series. Everyone who has kids in the age group I'm targeting I try to make sure they are aware. I have JGDS blog and the Junior Geography Detective Squad, so hopefully folks will keep following both and stay interested in the series for the duration.

Rena -- What were some of your favorite books as a child?
Elysabeth -- The Hardy Boys, Nancy Drew, mysteries or just about anything I was given as a gift to read. My godmother was a firm believer in giving us gifts that would last a lifetime, which meant books for me.
Rena -- I just want to say I've read State of Wilderness. I'm 43 years old and I learned a lot. I was pretty surprised how many clues I had to read before I figured out the state. The clues are tricky and get you thinking of other places. If I can learn so much from this book, kids will certainly benefit from it. Elysabeth, I thank you for joining us here today and I wish you lots of success with your book series.
Elysabeth -- Thanks for having me, Rena. It's been fun.
To follow Elysabeth's blog tour, click here for the full schedule. State of Wilderness can be ordered through Amazon or 4RV Publishing, LLC. The second book, State of Quarries will be released soon. As part of this book tour, Elysabeth is giving away USA map puzzles and a few state related items. The rules are --
1. Each person who leaves a comment and a valid email address in the comment will go into the drawing.
2. Only one entry per stop. If you leave several comments on the same stop, your name will only go in once.
Posted by Rena Jones at 12:03 AM