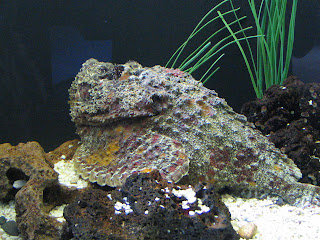 Meow? Yesterday Nancy sent me an article about PETA attempting to make fish more adorable by calling them Sea Kittens. Hello. You can read the article here. The idea is for people to think twice about fishing. You'd never dream of hurting a little kitten, would you? Apparently, the PETA website (which I refuse to go on) has a section aimed at kids where they can design their own Sea Kittens and learn how intelligent fish are. Uh huh. Now don't get me wrong. I don't have anything against vegetarians. A lot of my friends are vegetarians. PETA is another story. I think they're too extreme. This Sea Kittens thing is almost as ridiculous as them trying to talk Ben & Jerry's into using human breast milk in their ice cream. They're over the top, out there, cuckoo, loony tuney! I've seen cute fish -- Nemo! I've also seen some really ugly fish, like the one pictured here. I took this photo at Sea World in 2006. Such a cute little thing, isn't he? Kind of makes you want to hug and squeeze him and give him a little scratch behind his ears, doesn't it? Honestly, it's hard to tell if a fish was cute or ugly in its previous life when it's covered in deep fried batter, laying next to French fries. I like fish. It's good for your heart. Jesus liked fish. If it was good enough for Him, it's good enough for me. However, the next time I bite into a piece of halibut, I might have to control myself from meowing. Thanks PETA! Maybe next time they think of cute little Sea Kittens, they should take a look at this!
On a completely different note -- I've been revising an old picture book I wrote several months ago. It's true that it's helpful to put something away for awhile and then look at with fresh eyes later. I've found that makes a big difference. I've been revising my story and I think it's just about ready to start submitting. When I read it to my boys, they both started giggling and Neil ran up to look for pictures to go with the story. I think that's a good sign, especially if it's something he can imagine visually. I don't know what's the better feeling -- having my boys giggle at the funny parts, or listening to my youngest read the story aloud with me. I taught him how to read, so the fact he's reading something I wrote is pretty darn cool. And no, it's not about Sea Kittens. However, that would be one funny book!
Posted by Rena Jones at 6:56 AM