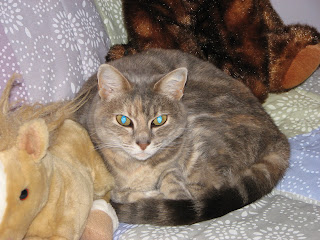 This is our other cat, Kitty. She's more of my girl's cat, as she doesn't have much to do with the rest of us. She's a little skittish. Kitty had a rough start at life. She was born outside our old house in California. She started coming around when she was pretty young. My girls would leave food out and she'd devour it in seconds. She'd eat anything they gave her. She was a good hunter, but times must have been hard -- she was skin and bones. She wouldn't let anyone near her at first. Eventually, she'd let the girls pet her a little, but then she'd run away. Finally, they were able to pick her up, which of course, led to bringing her inside. When we found out we'd be moving out of state, we didn't know what to do with her. The buyers of our house would be moving in with two dogs, one was a huge rottweiler. Kitty wouldn't survive. The girls started keeping her in more, hoping to get her used to being inside. Right before we left, she got bit by something (we think it was a snake) and had a huge abscess on her neck. We took her to the vet and I went on about how wild she was to prepare the doctor. "She's totally wild," I said. "She might freak out." Kitty came strutting out of her carrier, sniffed around the place, purred and let the vet handle her without incident. Typical. The girls took care of her and Kitty made the move to Montana. She's done great being an inside-only cat. She's still skittish, but she's come a long way from being wild and unapproachable. Kitty & Belle don't get along too good, but they tolerate each other. I've seen them on a few occasions try to play, but most of the time they just do their own thing. Belle likes to eat out of Kitty's bowl and Kitty likes to chase Belle down the hall. Kitty is really sleek and skinny, but she's no longer skin and bones like she was. She's funny because when she gets mad, she throws herself down and kicks her feet really hard. I've never seen a cat have a tantrum like that.
On another note -- is anyone having problems with Blogger today? When I went to my dashboard, it says I'm not currently following any blogs. I still see my avatar on other people's blogs, so I don't know what's going on with that. Has anyone else had this happen today? I love the follow feature to help me keep up with who's posted a new blog. Mine just seemed to vanish overnight -- what happened?
Posted by Rena Jones at 6:52 AM