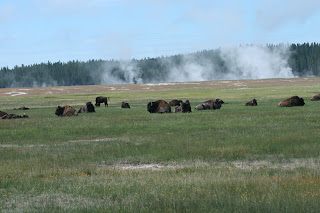 I hope everyone had a fun, safe 4th of July weekend. We didn't have any plans for the weekend, up until 1:30pm Friday afternoon. We decided to take a spur-of-the-moment trip down to Yellowstone National Park. It's a 6-hour drive, but took us 7 with stops. We tried something new this time and decided to take my Jeep Wrangler. In order to do that, we had to pack ultra-light, which explains why I didn't have my laptop. We managed to get clothes for myself, Rick, and the boys into one medium duffel bag. That was amazing in itself. We spent 2 nights and stayed at a hotel in West Yellowstone, Montana. It's right next to the West Entrance to Yellowstone, so it's really close. We got in around 10pm, so it was too late to do much, but we spent all of the 4th of July inside the park. Saw the geysers, the Grand Canyon of the Yellowstone, lots of bison, elk, deer, osprey, ravens, huge cut-throat trout jumping up the river, even a dead snake.
I had hoped to miss the 4th of July hoopla by spending the day in the park. Boy, was I ever wrong about that! As we left Yellowstone yesterday and headed back to our hotel, we were locked in town by the local parade. We couldn't go anywhere, so we figured we'd get out and watch. Very small town parade, but it was cute. Nearly everyone had candy that they tossed to the kids, so the boys made out like it was Halloween. Neil realized the more he waved, the more candy he got, so pretty soon he was jumping up in the air waving his arms like a maniac. Then there was a fireworks show in town around 10pm, but we were too tired to go watch it. Rick and the boys did walk outside to see a little from the distance. But so much for missing the hoopla, as we were right in the middle of it! The funniest thing was when we had to wait behind a car to get into the park. The ranger at the booth told us that the car in front of us asked when the fireworks show was going to happen in the park. I guess he thought it would be inside Yellowstone NP.
But it was a fun trip, even though it was so quick. We had some nice weather on & off during the time we were in the park, so we took the top off the Jeep. That was really cool, especially being able to take pictures. Then this morning right before we left, we stopped at the Grizzly & Wolf Discovery Center. The grizzlies and the wolves pictured on my slide show below were taken from there. We had wolves walk up to us at the window (we were inside and they were outside) and they were within inches of us. Even behind glass, those animals are so intimidating. I couldn't even imagine running into one in the wild. We go to the Center every time we're in town and it's always really interesting. Of course, it's better to see the animals in the park, but these are ones that can't be reintroduced in the wild, so they're very well cared for. The slide show below has pictures from the whole trip, including Tony Hawk & GI Joe standing in front of the Fountain Paint Pots, as well as the Discovery Center, the parade in town, and the park itself.
Please check out my blog tomorrow because Nikki Shoemaker's book tour will be featured right here. What's Wrong With Mud? is an adorable picture book and you won't want to miss it. In case her name sounds familiar to you, Nikki is also illustrating my book series on animal groups. Please stop by and check out her book tour. She has a lot of fun stuff planned, including some great prizes. Hope to see you here!