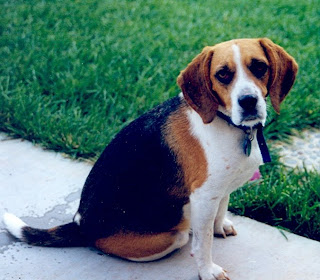 Yesterday was National Dog Day. I got so excited about the new cover for Dilly that I overlooked the dog's big day -- sorry about that. Are you a dog person? I grew up with lots of dogs. My sister always brought them home. "But Mom, they're going to kill it!" Sharon would say. She always had some good story and because of them -- we always had dogs.
Everyone in our neighborhood has dogs, except for us. We're probably the only ones without one. Whenever there is a bear wandering through the neighborhood, I can tell it's location by the sound of the dogs. I like dogs, but I have no desire to get one. Keeping up with the cat box is enough for me and I don't like dogs messing on the grass with my boys running around. It's bad enough when a neighbor's dog does that on our lawn.
There was a time when we had 2 beagles. Both were adopted from a beagle rescue center in California. Maggie (below) was a red, ticked color and Monty (above) was the traditional tricolor beagle. Maggie was a spaz. She was a typical beagle who was content doing her own thing. Monty was a neurotic mess. He had issues. I'm not sure if it was because of something that happened to him as a puppy or if he just had a mental disorder. He was afraid of his own shadow. When he got nervous, he would drool. It wasn't your average dog drool either -- this was sticky, gooey, almost-like-rubber drool. We used to call it his fangs because it would just hang there. In fact, if you look closely at Monty above, you can see his the start of his drooly fangs -- ick. They'd get so long that when he'd shake his head, they'd flip right over his nose -- ick, ick!
The beagies, as we called them, were fun dogs, but they both had issues. When we got them, the girls were probably the same age as the boys are now, maybe a little younger. Eventually, the boys came along and we just didn't have the time to devote to the dogs. We took them back to the rescue center, which wasn't easy to do. For Maggie, it was a piece of cake. It was almost like she expected to go back. She took off running and never looked back. Monty was a little more skittish and had to be drug away. That wasn't fun. However, both of them were quickly adopted back out to good homes, so I was thankful for that. We still joke that Maggie has made a career out of being adopted. Then when the owners return her to the center, she usually comes back with new leashes, toys, food, blankets and all sorts of goodies. I think she was a professional scam dog, taking owners for as much as she could, and then returning for her next victim. Look at her below -- she's evil!
So, how about you -- are you a dog person? 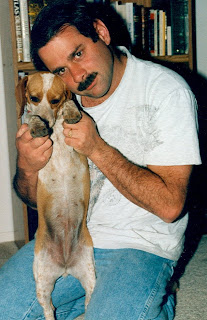